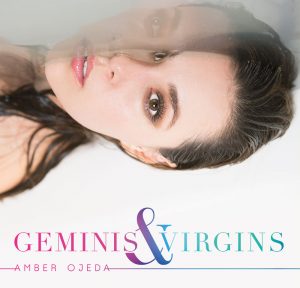 Amber Ojeda has debuted a music video for her single, “I’m Getting Up” off her third studio album, Geminis & Virgins. A creative and dark undertaking, the video features alcohol, sex, an evil mermaid, and murder. It makes for disturbing, yet mesmerizing viewing.

On Geminis & Virgins Ojeda blends her emotive, soulful voice to craft catchy songs that fuse pop, R&B, jazz, and electronica. The songs bring to life stories inspired by intimate relationships and experiences that are grounded in Ojeda’s personal truth. This album chronicles her journey to embracing her sexuality, her fears of commitment, and standing up for herself in adverse situations. “I’ve learned where there is conflict,” she says, “there is also an opportunity for growth and empathy.”

An upbeat track with a danceable pop beat and hook-filled chorus, it takes a minute to realize that “I’m Getting Up“ is actually a little bit dark. While describing a clearly consensual relationship, the lyrics reveal that the person singing can only find release from her own internal battles when she can provoke external conflict with her lover. “What’s the point in lies? If there’s no you to fight … I’m getting up.” And in case the listener has any doubt the bridge makes it all very clear: “Though the fighting be crazy, I’m still down with it. I’m down with him, down with it.”

Rather than depicting a literal interpretation of a conflict-filled relationship, the video takes these dark themes to a more sci-fi, horror-movie-type place. Ojeda says that making the video was a real test in trust for her. “The director, Saiful Haque, had a very strong and ominous vision for the video that made me both excited and anxious. I knew I wanted to be a mermaid (because, well MERMAID), but the dark nature of the shoot really made me uncomfortable. In the end, I think we accomplished something haunting without being overly graphic. I am really proud of this work.”

I agree, but with the following caveat: viewing the video without first hearing the lyrics can definitely lead to uncomfortable, triggering even, questions about consent at the start. But with the lyrics laying it all out regarding consent and the video moving to introduce evil mermaids, murder, and mayhem, those questions quickly become just one of many that you’ll have before the end.  You can view the video for “I’m Getting Up” below.