Meet Aabaraki. Four dudes coming out of Brooklyn, who are poised to blow anyone who listens to them away. They describe themselves as ‘alt-soul’ somewhere between “Gnarls Barkley and The Black Keys”. They released their first self-titled EP back in 2011 which introduced them to the Brooklyn indie soul scene. They followed that up with ‘The Emancipation Vol. 1’ which made waves across the country. The EP featured the completely awesome single “DanceShee” and was backed by a tour. On November 19, they are releasing their first full length album recorded from a crazy good live performance from earlier this year. Fortunately for us they were nice enough to take some time and answer a few questions. Brian, Akie, Attis and Ari are ready to funk their way into your consciousness and become your new most favorite band. 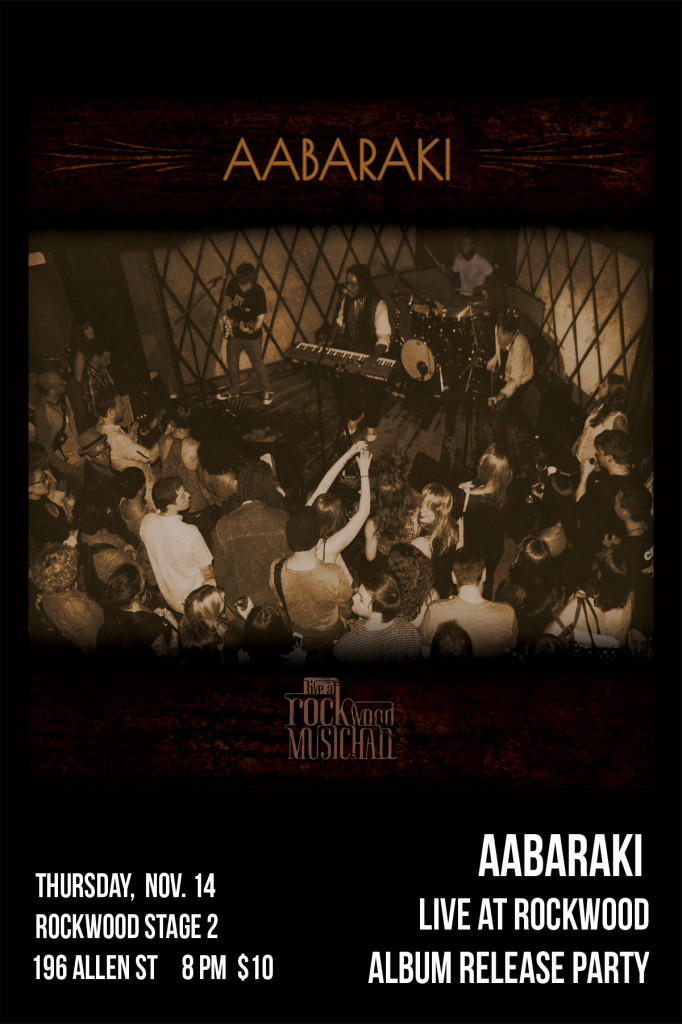 Hey guys, I am just coming to your music and I have to tell you I was pretty blown away. What I loved about it is that it has this contemporary funkness & soul, kind of like the RHCP, but it was so smooth. I know there’s a heavy Jazz background happening as musicians, do you attribute that smoothness to that or something else?

We are like reformed missionaries who once worshipped at the altar of neo-soul and Yacht Rock like Christopher Cross & Steely Dan, but have now seen the light of a truer calling. We are now finding our true path of righteousness… everything needs more noise, more edge. We want to record as close to chaos as possible… and then to just let it all sort itself out. Where is Rick Rubin…? I think we need his number!

So much of what is out there now is just repetitive noise, your music has so many layers. When you come together to write do you guys make a conscious decision to go in that direction or does it come organically?

We write almost all of our material locked together in the same room. Sometimes one of us comes in with an idea, but then we all break it to them (how terrible that idea is) and we just proceed to write something together that is exceedingly superior. After the songwriting is finished, we then go into the studio and add as many layers as we can think of. Then the computer crashes and we lose half of them…and what is left is usually almost perfect.

You’re based out of Brooklyn, does that influence what you play and write? What/who are some of your influences?

I think it is safe to say that Brooklyn itself is an influence. We used to like Mos Def but now he fallen off. Dave Chapelle is a pretty big influence…doesn’t everyone in the human populace wish his show was back on TV? Stanley Kubrick’s film making feels almost exactly how I wished our band could sound.

How did you guys come together as a band?

Brian, the guitarist, runs a studio in Brooklyn called The Gallery. He stole Ari, the bassist, from one band’s session… and the drummer from another. Akie pretty much walked in off the street and said I’m here to sing! (Actually we called him on his cellphone and he was polite enough to actually show up.)

I feel once people hear your music, they’re going to want to see you live. What are your touring plans?

We basically want to be everywhere, anywhere that would have us. Last year we toured the east coast and South on the way to SXSW. We’d love to do that again (apart from getting pulled over in our van in Louisiana, but that’s a story for another time.) We’d like to get to the Midwest again, and definitely to California. We have some contact in Europe, but they haven’t returned our phone calls.

My last question I always borrow from James Lipton and Inside the Actors Studio, because I feel it gives great insight into the artists’ personality. If heaven exists and there is a God, what would you want to hear him say to you?

I heard you guys on Spotify (sorry, I couldn’t afford the record). I love “DanceShee” but I wish there were more guitar solos…The studio is over there… *points to Ravi Shankar and Ludwig Van behind a huge Neve console where they are recording River Phoenix’s vocals. Andy Kaufmann is behind them waving his hands wildly saying “turn it down! Turn it Down!”

If you’re in NYC, you can check out Aabaraki at their Album Release Party
at Rockwood Music Hall’s Stage 2 on Thursday, November 14!