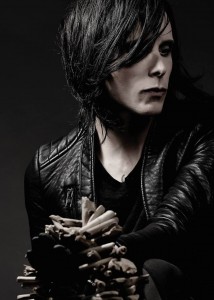 “Happiness,” the first single off IAMX‘s upcoming sixth album, Metanoia, drops today (June 19, 2015) via Metropolis Records. Metanoia — the highly anticipated album expected to drop this fall — is the first new material from IAMX since the band released The Unified Field in 2013. Chris Corner, founding member and singer with the band Sneaker Pimps, began IAMX as his solo project in 2004. But after releasing The Unified Field, IAMX took a sudden and unexpected break from recording due to Corner’s chronic insomnia. “There was a point when I believed I would never make another record,” says Corner. “I associated my career with everything that was hurting me, but slowly I managed to filter out the poison and get back to what I really love.” After hearing the latest single, IAMX fans will be thrilled that he has done so.

“Happiness” is a gorgeous intersection of electronics and Corner’s fragile, yet commanding voice, layered with a fresh sense of urgency. Corner says he intentionally limited the sound on this track to drum machines, a few synthesizers and piano samples as a way to return to the trademark IAMX sound — a “mutant hybrid” born at the crossroads of his love of music that is purely electronic and music that is purely acoustic. Led by Corner’s amazing and masterful vocals, the single journeys through anxiety and doubt on a search for happiness. Powerful lyrics, massive synthesizers, some industrial/techno effects, and background vocals contributed by keyboardist, Janine Gezang, complete the sonic landscape of the track. The track is very aptly named and should make for happy IAMX fans, indeed.

“Happiness” is available as a free download today — with a remix by Gary Numan — by joining the band’s mailing list on the IAMX website.  The single and remix are also available on iTunes and other digital outlets.  The upcoming album, Metanoia, can be preordered at the band’s PledgeMusic site.  In addition, IAMX will undertake a full-fledged U.S. tour this Fall. Tour tickets go on sale today (Friday, June 19th) concurrent with release of the single. Follow IAMX on Facebook and Twitter for all the latest.