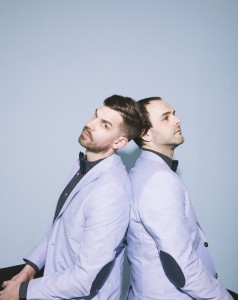 Twin Within is the collaboration of Canadian duo Steve McKay and Alex Samaras. Mckay (drummer with Bruce Peninsula) was performing when he met Samaras (a Tuvan throat singer with vocal ensemble GREX) and the two found they shared common musical ground. They started rehearsing outdoors together, effectively ‘discovering’ their sound – an outdoor, sun-kissed Californian folk-pop.

Their debut album Horizontal Lines is grand and ambitious. Here they explore 60’s baroque pop, folk and lounge on an album that fizzes with bright songs and smooth production. Co-produced with Kirk Starkey who provided string and wind arrangements, their voices combine, entwined in melodies, subtly complimenting each other and finding a seamless blend that forms the core of their songs. There is a trust and understanding between them. First single “Bernie” is a perfect example, coming from a place of discovery:

“Writing melodies and coming up with arrangements comes really easy to me,” says McKay, “but writing lyrics is tough. When we were writing songs for this record, I was listening to a lot of Elton John and thinking about that whole Bernie Taupin lyricist-partner thing. It’s like it would be so much easier if somebody else would write the lyrics for me and I could just hammer out the hooks”.

“We were going for a bit of a James Taylor vibe with the arrangement,” he continues. “It’s just an acoustic guitar, tic-tac bass, piano and floor tom. We specifically recorded this with a classical music engineer, Kirk Starkey, with the hope that he might pull a little more out of the acoustic instruments and the Church where we recorded. I think he did a pretty good job”.

Steve’s years of experience touring with Canadian baroque act Tafelmusik has subconsciously influenced the way he arranges Twin Within’s instrumentals and Alex’s vocals are so much more than background, enhancing the arrangements with depth and originality absolutely essential to the sound of the whole record.

Throughout, the album moves and changes from the baroque, soul and folk of the Righteous Brothers, Walker Brothers and Simon & Garfunkel in songs “Bernie”, “Tunnel To The Reservoir” and “We Talk” to the grandiose chamber pop of The Divine Comedy in “Faraway Car Ride” and “Night Danger” all the while establishing and developing their unique and contemporary identity.

Packed full of assured songwriting and hummable pop hooks, Horizontal Lines is a charming and breezy pop record that sits comfortably alongside albums from the 1960’s through to those of the 21st century.

Out now on Hidden Pony Records.

Twin Within on the web: