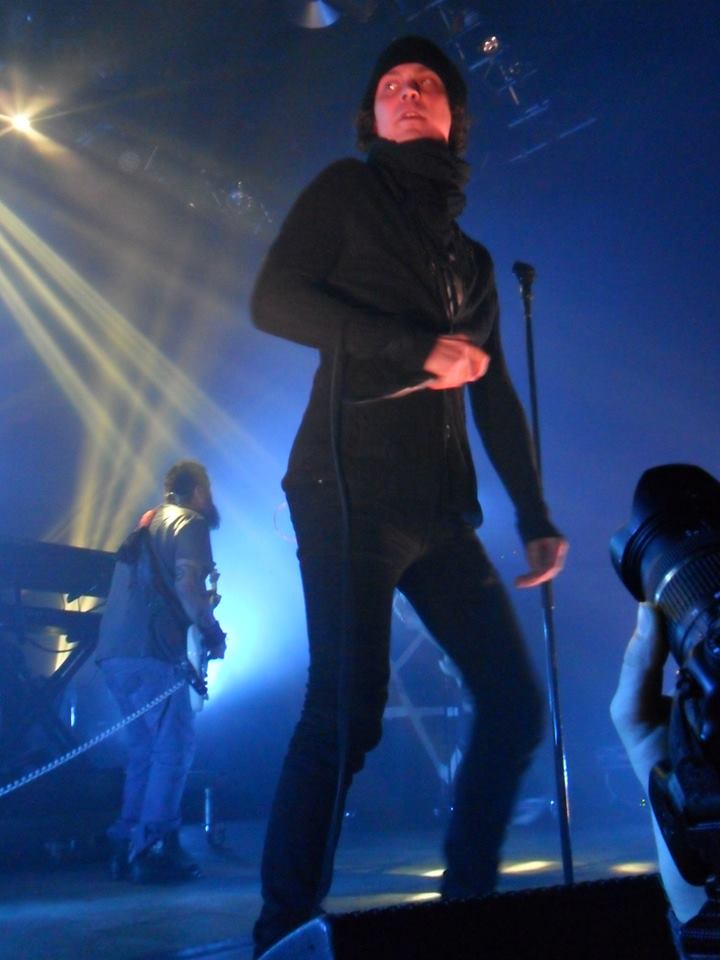 It must have been a bit cold on stage by the time HIM’s front man Ville Valo and the band walked on with the singer wrapped up in a hat and scarf. But as soon as Valo announced “Whats up? Here we go…” the temperature soon rose as the Finnish rockers launched into “All Lips Turn Blue” for the first number. Second song in was “Buried Alive By Love” of which a smiling Valo got the crowd participating in every chorus. “Wings Of A Butterfly” followed in what was turning into a very swift gig with the band churning out the songs in quick succession. “Right Here In My Arms”, from 1999’s Razorblade Romance album, was the fourth of an impressive set before “The Kiss Of Dawn” almost immediately. “I Will Be The End Of You” brought the set right up to date, a song from this year’s Tears On Tape album then the band gave the invitation to “Join Me In Death” for the seventh song of the night.  “Your Sweet 666” was the next song to keep the crowd buzzing which was then followed by “Passion’s Killing Floor”, from 2007’s Venus Doom album. “Tears On Tape” was the 10th rapid number on display before they raised the crowd a bit more with their version of Chris Isaak’s “Wicked Game”, for which Valo gave the stage to bassist Mige Paananen and guitarist Linde Lindstrom for an axeman face off ably assisted by drummer Mika Karppinen and keyboardist Janne Puurtinen. Valo and company then go into “It’s All Tears (Drown In This Love)” quickly followed by “Soul On Fire.” Another off the Tears On Tape album comes in the shape of “Into The NIght” before Valo declares, “Its never too late for a funeral…” and the band go into the penultimate song, “The Funeral Of Hearts.”  The break before the encore is double quick, even surprising the returning band before they close the show with “When Love And Death Embrace” to rapturous applause from the fans. Ville Valo did tell the crowd that the show “feels very special and we feel very special.” And, indeed, the fans felt exactly the same, thanks to Finland’s finest rock outfit.

Check out images from the show here.