Released on 25th October, The Tower from indie/alternative band Hearts Fail sees lead man Edward H. Wagner take his music into a new chapter. Based in San Antonio Texas, the band was formed in 2003 and has a number of previous releases to his name. With The Empty Promises released in 2004 and with four further albums released giving us …Other Blessings in 2011, this year the long awaited The Tower brings twelve new tracks to get your ears around. 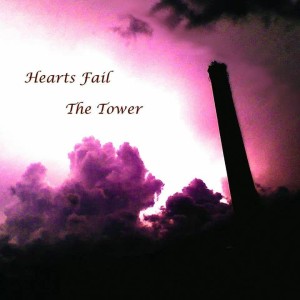 Hearts Fail has seen a few different live line-ups over the years but the style and themes in the music all come from the pen of Edward H. Wagner. Described as being a dark indie/post-punk act, their influences contain a list of some of the popular alternative bands from the likes of The Chameleons, Joy Division, The Cure, The Smiths and Bauhaus to name but a few.

A journey through the work of Hearts Fail will take you through a journey of some of the influences listed. You’ll find song themes and soundscapes that echo the music that builds the foundations that Hearts Fail builds on.

The Tower continues to build on this foundation; however you’ll find that this album is more Hearts Fail possibly than previous releases. Tracks like “Dreaming” and “Two Worlds Apart” have their roots in an almost familiar Indie sound that some will identify with from early albums from some of Ed’s influences. Whereas other tracks strongly identify more of a Hearts Fail sound and draw more from previous releases and reveal less of the influence behind them.

Tracks like “Always” and “Stormcloud” brings a familiar Hearts Fail upbeat tempo and style that in a live performance will give crowds something to dance too whilst other tracks like the title track “The Tower” brings a very dark yet still melodic contrast to the album and shows Ed’s ability to mix Hearts Fail styles and leaves room to explore lyrically.

The Tower leaves you with an almost surprising instrumental track to bring the album to a close. “Into The Light” rings out in an almost lullaby style and concludes the journey through the album to almost leave you with the feeling that everything is ok, and although the album explores some dark melodies and themes , it ends with something very different — almost childlike.

Hearts Fail’s The Tower is available through the Hearts Fail website and you can find more information and keep up to date with everything Hearts Fail at the following links.