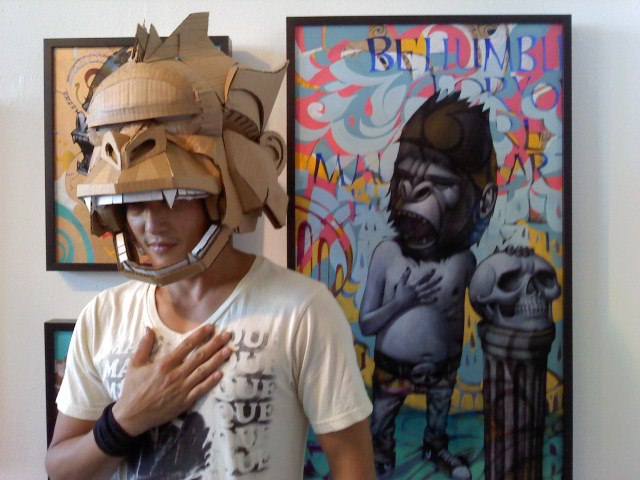 John Park is a visual artist from So Cal who a few “real art critics” would easily discount especially when they take a closer look at the mediums he works in.  Most of his paintings are done on plywood.  They start with Sharpie designs that are painted and then charcoaled.  Last year, John and some of the DoArt folks participated in the Great Cardboard Challenge inspired by Caine Monroy’s Cardboard Arcade and sponsored by the Imagination Foundation.  John jumped on the opportunity to reclaim some corrugated material and sculpt it.  The gorilla theme that was already evolving in his paintings made the next step to three-dimensional.

This progression came together at C.A.V.E. gallery with his “Gorilla Warfare’ show earlier this year.  At the opening with girlfriend Julie Hunter, the couple presented an additional piece to the collection that was a case of art imitating life, imitating art.  Park had perfected the cardboard gorilla masks with fully articulated, geared jaws and added his Sharpie and paint treatment to them.  Fabric was painted to match the dress on the female figure in the central painting of the show.  Julie and John were the characters in the painting.

In Park’s words, “The first ‘Gorilla Warfare’ characters were pudgy, shirtless boys with enormous, mean looking gorilla heads brandishing automatic weapons.  They symbolized my frustration and anger with the political and social situation in America.  That spawned the first cardboard helmet.  Prior to that, I had done several cardboard projects in art school.  Then the helmet inspired the (painting) series of people wearing a gorilla helmet and holding guns that have flowers coming out of the barrels.  It’s a metaphorical and literal evolution.  The paintings of people in gorilla helmets inspired the next version of the cardboard helmet.  I tried to stay true to the expression and size of the cardboard gorilla head relative to how they appear in the paintings.  I just painted a mural on the Venice boardwalk of a boy wearing the new helmet.  It’s a positive feedback cycle!”

Was it John or Julie who sparked the idea to recreate the dress in the painting or was that whole thing (painting and costumes) all born together?  The answer was a bit of a surprise.  The inspiration actually came at the suggestion of friend Hans Haveron.

Does Park feel that he would have gone down the gorilla helmet road without the invitation to The Great Cardboard Challenge?  He says he definitely would not have gone in this direction without it.

Recently, Park received a commission for a gorilla mask from game giants Activision to be hung in their Santa Monica office.  It is significantly larger than the previous creations.  Another artist who had seen his work referred John to the gaming company.  John also just completed an outdoor mural that continues the ‘Gorilla Warfare” theme on the Venice Beach boardwalk.

For more information on John Park and to purchase prints of his work visit: