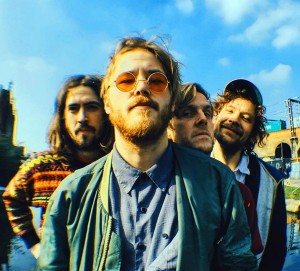 Scandinavia has really got it going on.  We’re obsessed with their detective noir literary/TV genre and most of the great music this century has come from there.

Here’s a new Swedish band for your attention and they are going to stick in your mind with their first single “Kinky Lola”.

It’s a controlled frenzy of quirky guitars and rasping, slightly deranged vocals.  It sounds like it is right on the edge of exploding into something chaotic but there’s enough to keep us fulfilled for now.  It has the madcap feel of bands like Cardiacs, Xiu Xiu and Animal Collective.

Francobollo is a refreshing change from the studied, production-heavy blandness that seems to be de rigeur right now.  Indeed, frontman Simon Nilsson says ‘Kinky Lola is about missing the honesty and the straight-forward attitude about a lot of music we grew up with‘.

Their first EP is out later in the year, with an album to follow in 2017.

Written By
Paul Davies
More from Paul Davies
‘Oh Manchester, so much to answer for….’ In the history of music,...
Read More