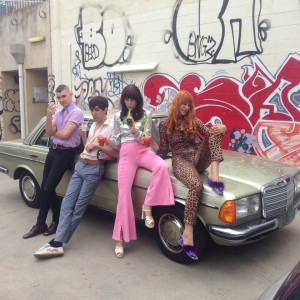 In the 70s, you see the stars entering the clubs of NYC and the average Joe would sit outside the VIP room contemplating what happened on the inside. A Warholian atmosphere full of bright colors where just about anything in your imagination could become reality? Was the trip of the century behind those doors? If they survived it then, they don’t talk about it now. Melbourne based Glam Pop Rockers Pearls decided to pull back the velvet rope of the VIP room and show you what may have went down in their latest video “Pretend You’re Mine.”

The track brings you straight into the era with its very disco inspired synths and heavy drum beat. The textured, gritty vocals are quite difficult to understand but don’t allow that to turn you away. “Pretend You’re Mine” gives off a chill melody without being too mellow. Like a cross between David Bowie and Goldfrapp You get a really relaxed hang with your friends feel, but with the synths you have this club like tone where it can take the party with your friends to the nearest social spot in town. Not too dancelike, not too low key, just the perfect hangout track. If you do want to take that disco party out on the road, you’re going to have to get the look and get ready for the ride. That’s what you get with the accompanying video.

Put on your shades because this video is bright and full of color. The video opens up with the band playing in a small area. It’s like they’re the lounge act in the back. Throughout they take you back and forth from the lounge where you can see the band sipping on champagne to playing in front of creative little green screen textures running in the background giving off what looks like an influence from late 70’s through late 80’s music videos. It could be just the green screen and the strategically placed lens flares giving those decades feel. Though, I don’t think there were leopards having sex in many of the popular videos of the time. If there was, please let me know. As with the time, there were some questionable activities that happened. There’s a bit where a young man is licking quite provocatively a bronze hand. In other words: the video is slightly NSFW! Nothing is off limits when Pearls takes you behind closed VIP doors in “Pretend You’re Mine.”

Pearls on The Web:

Written By
Serena Butler
More from Serena Butler
Good electro pop is more infectious than the common cold. Today we have...
Read More