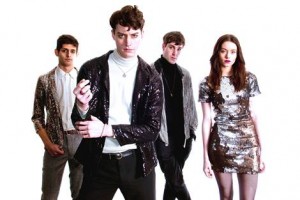 ‘Oh Manchester, so much to answer for….’

In the history of music, Manchester is well and truly on the map as a major influence.  Known perhaps more for the cold Factory sounds that came out of the late 70s, it is often forgotten about the next wave of Manchester influence as the 80s became the 90s.  The Hacienda nightclub was at the forefront of this era which saw rock, indie and dance cross over in the acid inspired, pre-Britpop swagger of the ‘baggy’ movement, often labelled ‘Madchester’.

It is the upbeat, dance-focused style that new local four-piece Girl Friend certainly don’t shy away from in their debut EP, Arrive Alone Leave Alone.

The EP is littered with the right mix of glitterball-retro synths and handclaps to produce a funky pop-disco recalling the best bits from the 70s and the 90s. It’s a pristine, polished sound and the smooth vocals from brother/sister combo, Amory and Eleanor, allow you to dream while you dance.

“Style and Substance” is the pick of the tunes, effortlessly fulfilling and highlighting Amory’s whispering falsetto. Catchy opener “Monte Carlo” has a breath of Saint Etienne about its melody and the overall laid back vibe and spoken word sample that comes in later reinforces this.

Girl Friend sparkle and shine in a disco full of glitter and cardigans but if you like your discos to be a little seedier then the final song “Stop” slows it down for a throbbing last dance before you get the night bus home.

Written By
Paul Davies
More from Paul Davies
It makes a change for the Three for Thursday to be male-dominated...
Read More