I feel dizzy. I feel drunk. You know when you “discover” an artist and you greedily consume their back catalogue? I’ve just spent a couple of bewildering, bedazzling and beautiful hours in the company of Blair Jollands‘ music and I am struggling to come up for air. It’s no good me writing about Blair and saying things like “words can’t describe this artist”. I mean, I could say that but then there would be no article to read.

So here are some words. I was going to offer up a review of Blair’s new album, as yet only provisionally titled, Half Life and also not yet finalised. I will do that but I will not be doing his talent justice by only drawing your attention to one album. There are four previous studio albums and an Acoustic Sessions live recording to grab hold of. Let me save you some heartache. Download all of them now. Not when you finish reading this. NOW.

From 2001’s stunning, sleazy, sexy debut Hotel to 2010’s synth-driven collection of superb pop songs, Lotus Mason, Blair Jollands crosses genres and styles like no other artist. You may see a man with a guitar and think “oh yeah, a folk/rock singer/songwriter”. Well, good luck with that. You’ll see from my interview with Blair that there are slight problems with lazy journalist pigeon-holing.

What draws all the tracks together is the keenest of ears for melody, harmony, space, and song craft. There are gentle ballads, there are stadium-ready rock songs, there is dirty, sexy funky sleaze, and there is innocence. In short, Blair Jollands is a great songwriter. However the song is packaged up, the craft shines through. Whether as a solo artist or backed by a band, the quality of the songs constantly excites the listener. You may skip a track here and there, that’s up to you. I didn’t. Each song offers something different and rewards you — simple melody, beautiful harmony, passion. This is someone with a passion for songwriting and for clearly writing each project from the heart. 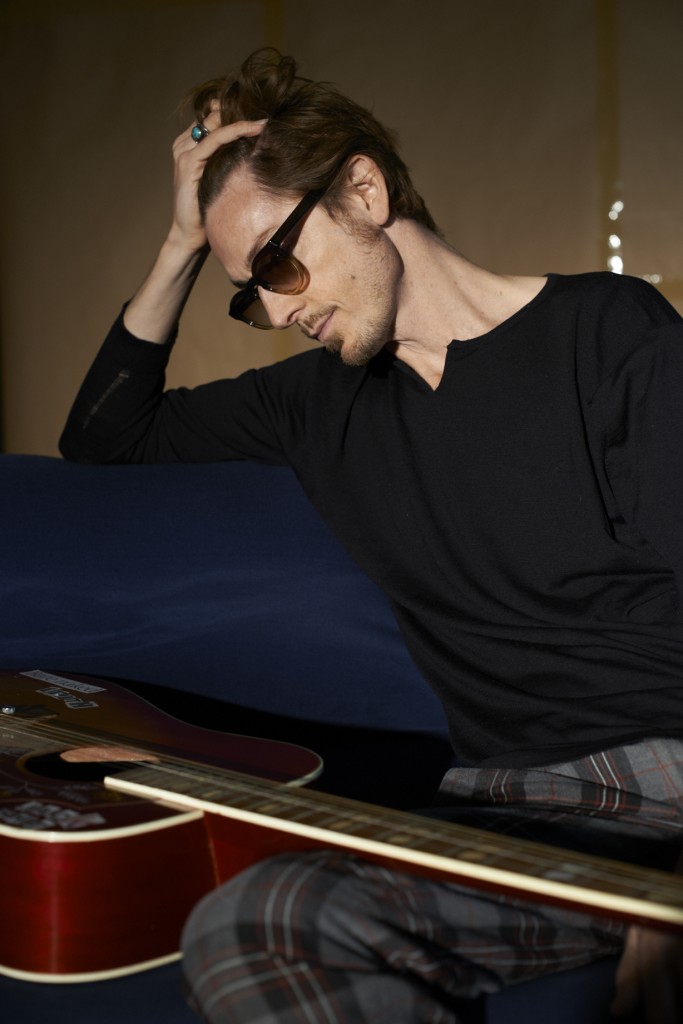 Blair’s voice is at once tender, powerful, engaging and pure. To hear the man speak you’d be forgiven for expecting each song to be delivered in a whisper, or perhaps a little nervously, a male Suzanne Vega perhaps. But give this man a microphone and you get Bono, Neil Finn and Nick Cave. Fans of the following will find something to love: Beck, The Cure, The Killers, Crowded House, REM, Fun Lovin’ Criminals, Talking Heads and David Bowie to name but several. But this is no copyist, this is someone who writes with a creative freedom that must come from his widely varied musical “education”. But don’t take my word for it, here’s my interview with the man himself.

So it’s the early 1990’s, New Zealand. You’ll find this version of Blair Jollands with his guitar, in a coffee shop. He began writing songs and playing with Andrew Brough who was ex-Straightjacket Fits, who had releases on the Flying Nun label. Blair says he learned a lot. “I didn’t write with Andrew but I observed his songs. How he crafted them. They were quite discordant and still sonically beautiful and I was very attracted to the sound of that conflict, harmonically”. Blair joined Andrew’s band, Bike. It was at this time that the transition from cover version strummer to songwriter was happening “almost subconsciously through working with Andrew and touring New Zealand”. They teamed up with Ed MacWilliams in Auckland. Blair was cutting his teeth, learning the craft.

Off the back of this experience, Blair wrote an album called Fuzzhead and took it to the USA. “Just me, a guitar and a few harmony peddles.” It was, Blair suggests, a “kooky” sound. The year is 1996, and Blair took Fuzzhead on stage at CMJ where he found himself sandwiched on the bill between a couple of big rock bands, which may have helped highlight his more unique take on music, and certainly drew attention to his performance, which was very well received. Following this, he came to London and put together a band. “We got a good response from the ‘In The City’ performance in Glasgow, including a couple of Guardian write-ups. Following this, we got management.”

Catapult forward to the early noughties. A few albums were released including first album Hotel.  “Me at my least distracted”, Blair offers. Also check the acoustic sessions, released a few years later. This contains cut back and distorted stuff including a harmonica. Check these out if you want to be introduced to what Blair does.

So that’s where he’s at, but I asked Blair about where he’s from, and how growing up in New Zealand has shaped his sound. “I was influenced equally by the Pacific Islands, the States and the UK.  I was surrounded by Maori, Samoan and Raratongan music and was working in a recording studio and mastering with the Raratongan and Samoan producers. Big choirs and sounds, almost Russian, Georgian.”

So how does the environment in New Zealand differ from the US or UK? “You’re very isolated in New Zealand. There’s not a lot of pressure and there’s lots of space to fuck about and experiment. It used to be relatively cheap to live there, on the dole as I was, so was very easy to be an artist.”

“Coming over to the UK, all the different music was so much closer and in your face. There’s more pressure to take on one genre or another. It was an amazing experience to hear drum and bass, jungle and Brit pop. Rave culture was going off as well. It was a real melting pot. I was like a kid in a candy shop. I also got into World music — Iranian, Persian, Flamenco and Gypsy music. I went to lots of festivals at the Barbican and so on. There was so much access to new music that I hadn’t been aware of in New Zealand.” 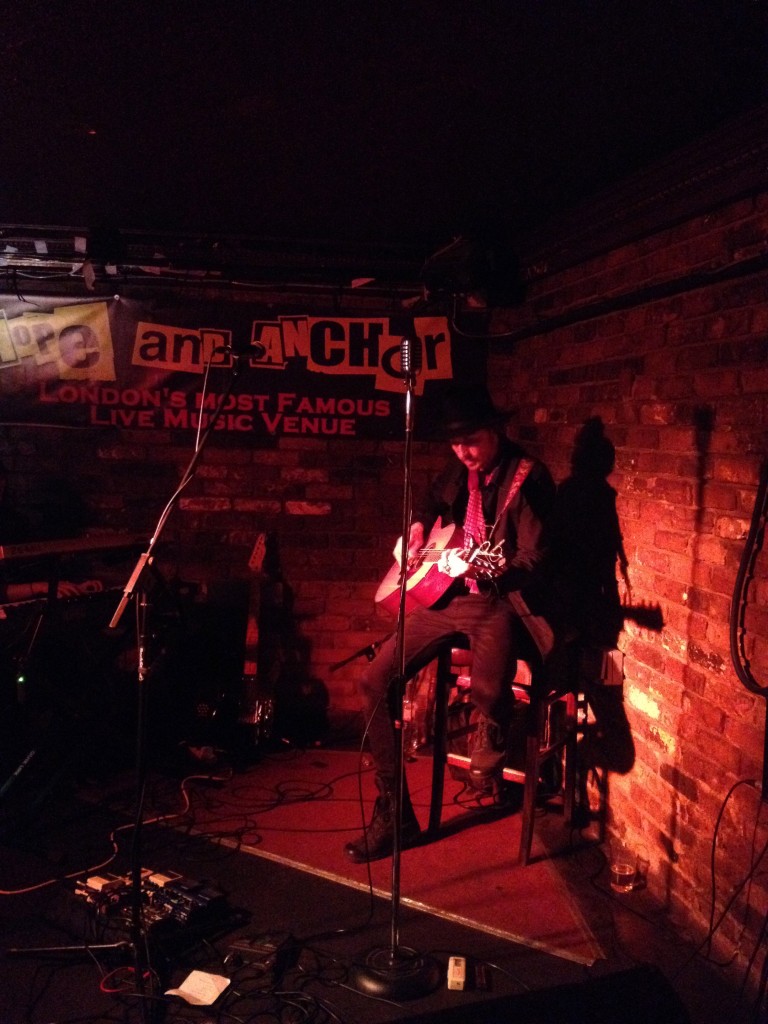 “I threw all of that into the first album. There’s so much shit going on there, but it’s mixed in with my style of ‘distant NZ’ music. I imagine I would have soaked up whatever music was around me wherever I went. But being here was so in your face, edgy and gritty.” It’s certainly true. Listen to Hotel and you’ll hear the sound of debauchery, chaos, lust and excitement that perhaps someone coming to London for the first time would feel. Above all, there’s a huge sense of fun.

I’ve mentioned that Blair has a knack of writing songs in many different styles, and we get on to the thorny issue of journalists having to pigeon-hole everyone. So I nervously ask, “have you been written about, and someone has compared you to anyone?”

“As far as genre is concerned, I’ve fought this one. A singer songwriter is someone who has a guitar and sings but that’s a very general description. It’s not all about what I do. Fuck it. Alright. I’m a singer/songwriter!”

There you have it folks, all this talent, all this variety, and look what you’ve made me do!

But seriously, you can’t listen to any of Blair’s songs and expect to hear just a guitar and vocals. There’s a depth and edge to them. This has been a feature of Blair’s music from the very beginning. He also works as a sound designer on films. “The Fuzzhead album had sound design underneath it, even before I was a sound designer. One song started with a railway crossing and someone getting punched in the face as a kick drum. I then naturally fell into the sound design work and working with film. That cinematic influence comes through in my songs now. I like throwing it in there. I’m very fond of Ennio Morricone. You might not say he’s a sound designer, he uses real instruments, but there’s wind and other sounds in his soundtracks.”

“I like bringing in rhythmic elements. For “My Way Home”, on the new album, provisionally entitled Half Life, I’m using marching soldiers to form the beat. Some industrial sounds are in there too. The meaning behind Half Life is more ‘atomic’. The scientific term. It’s not about being half dead, which I guess I am, if I’m lucky!”

It’s been a while since there has been any output. Not since 2010’s Lotus Mason in fact. I ask him why it’s time to come back. “It was just time. I played live last October, but only did one gig in 2012, and two in 2013. I took a break because I wasn’t feeling it. I just thought, I don’t know if I’ll start again, but I’ve got to stop. Then I became a parent and I started getting lots of ideas but didn’t have much time to put them down. Then I got my mojo back and started feeling really good about the music. I felt the freedom to experiment and be an artist again.”

Before we sign off, I wanted to ask Blair about his musical heroes. I have mentioned artists that, if you like them, you will like Blair’s work. But the subject of heroes is always an interesting one. It may not mean you sound like them, but they help shape who you are as an artist.

“I was kind of ashamed to say this once upon a time, but the reason why I picked up the guitar was because of Mark Knopfler and JJ Cale. I was totally blown away that a guitar could sound like that. Then I got into Bob Dylan and Jimi Hendrix, Woodie Guthrie, Leadbelly then Al Green and more Memphis kind of stuff. Then the Doors. Then I got into singers. It was always singers that grabbed me. the ability of a singer to get to your soul. When I heard Elvis I thought, my God, what a beautiful man, to be able to grab your soul. I’ve only mentioned male artists. I like Bjork and (whispers) was a big fan of Madonna once. Dylan, Elvis, Bowie, Beck, Jonny Cash…I could keep going.”

Blair is playing live again, and you can read a review of his April 25th gig at Hope And Anchor in London, elsewhere. I asked him to tell us what anyone turning up to the gigs can expect. “I’m gradually building the band up to be a good representation of the album. It’s slightly cut back still, due to finances. I can’t have a string section and backing singers live yet. I’ll be going to though. It’s all new material. I don’t expect that people would anticipate old stuff. It’s all forwards from here, it’s a conscious decision.”

Finally, now that you’re back recording and playing live again, are there any unfulfilled ambitions? “I’d quite like to play Carnegie Hall or Albert Hall, that’d be nice! That’s a difficult one, an open-ended one. Just…continue. A big challenge as a songwriter is to bare it all. I’m very fond of performing so this is the first of many gigs. There’s a big gospel influence in the music, so having backing singers is really important to me. I want to get that so I can replicate the songs live. It’s almost back to basics for me, and we’ll take it from there.”

Blair Jollands. A great songwriter, getting back to basics. Now there’s something to look forward to.