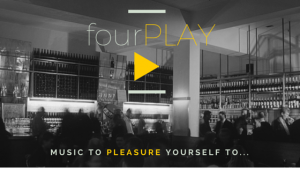 It is a truth universally acknowledged that Fourplay is often best when you are not expecting it.  Months might pass without it in your life and you may gradually forget about how much satisfaction it can bring you.  The emotions, the highs.  Oh how much you want it…how much you love it… removing yourself from those humdrum shades of grey and instead you become immersed in a world of sensuous colour.

We are talking about new music of course, and how naughty we have been depriving you of our FourPlay column for so long.  Due to an ever-increasing inbox of quality tuneage, we now list four new slices of musical filth for your pleasure….

Sweet, laid back indie pop with a retro jangly feel, “Wallflower” is the second single from Glasgow based Martha Ffion. Her vocals mix the softness of The Sundays with the intent of Sharon Van Etten and she has fast been attracting notable UK radio airplay.  If this is your introduction then you can also check out her first single, “So Long” or catch her on one of her several UK dates in February.  Martha Ffion on Facebook

Scuzzy indie with a laid back attitude that is addictive and essential.  Like a more melodic Jesus and Mary Chain, this song is so instant it feels like a classic single you have known for a long time.  “Byker Drone”  is the first in a series of releases that will precede their debut EP.  Keep a look out for more… EAT on Facebook

There aren’t many songs that go from quirky to cinematic so quickly.  Opening with piano and a soaring vocal somewhere on the spectrum between Joanna Newsom and Lana Del Rey, “Paradise” fast becomes dreamy and dramatic, biss-heavy in reverb and emotion.  The good news is that it is out today.  Animalia on Facebook

LA five-piece Banta have album Dark Charms due out February 12, and this is the single to promote it.  It’s full of pumped up funky kicks, and Haim-like harmonies to please fans of indie, pop and indie pop…   Banta on Facebook

Written By
Paul Davies
More from Paul Davies
Here are two new releases to give your week some meaning.  Today’s picks...
Read More