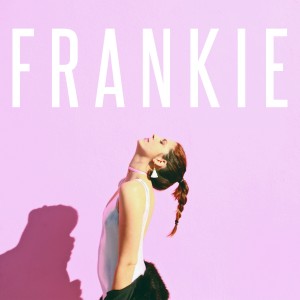 Frankie is the emerging LA-based artist whose ability to channel the “girl power” vibe and deal-with-it attitude of artists like Stevie Nicks, Joni Mitchell, and The Spice Girls in perfectly produced pop confections has put her on the short-list of emerging artists to watch (and listen to) this year. Fresh off her debut performance at SXSW and with her debut EP “Dreamstate” set to drop April 14th, she’s still a relative newcomer to the indie music scene, yet an incredible buzz surrounds Frankie that only continues to build with each new track released. Combining bubble-gum doo-wop and 90’s pop with Motown grooves and electronic beats, Frankie’s brand of girl power sizzles; think sweet girl-next-door, with an edge.

“Blackout” was the first glimpse at the pop-tastic fabulousness that awaits on Frankie’s upcoming EP. With its carefree, bouncy vibe and massive hook, as well as its accompanying fun-day-with-friends-at-the-beach themed video, the track is an exuberant celebration of girl-power. But it was her sophomore single, the airy California-cool track “Problems Problems” with its summer anthem worthy pop hook, that really got people buzzing. The song has a retro vibe, complete with cooing harmonies and sugar-sweet vocals, and is set to such snappy beats that you can’t help but bop your head and sing along. And having already garnered close to 800,000 listens on Soundcloud and Spotify combined, as well as a remix by producer duo BLU J, “Problems Problems” has proved itself a pop gem that deserves, dare I say needs, to be heard.

And with her just recently released single, the aptly entitled “New Obsession,” Frankie is poised to become exactly that to her rapidly growing number of fans.  This is a track with a killer groove so if you enjoy polished, punchy pop tracks, then you best be prepared for it to become your latest jam. Now go forth, listen, and be charmed.