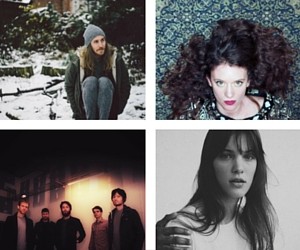 Don’t worry, we haven’t gone all Sesame Street on yo ass.

This week we have had a plethora of artists beginning with C so why not throw them all together into a one-off FOURplay so you get an equal thrill of folk, indie and soul and discover some new artists to boot.

Australian singer-songwriter Calan Mai has released his first single from forthcoming EP This Isn’t How You Get Home.  “Mountain Mountain” features Linying and adds a great male/female vocal contrast in a song that mixes lo-fi, folk and electronica.  It’s like a huskier Jack Penate and recalls other classic male/female duo vocals in its storytelling harmonies (think “Bonnie and Clyde”, “Fairytale of New York”, “5 Years Time”)  As a song it avoids the traditional verse-chorus structure and appears to stay in one place moodwise but it doesn’t need to detract from the central vibe which is effortlessly and hypnotically cool.  Calan Mai on Facebook

Here’s a new solo artist from London.  “Skin”, the first single from Carmody showcases a mature sound that wastes no time in getting started.  A delicate and saintly-soft vocal becomes ever more seductive and soulful over a crisp piano and a sweeping buzzy bass.  You can get further acquainted with her self-titled EP out April 28.  Carmody on Facebook

Merseyside five-piece Cavalry release new single “Everything” in advance of forthcoming support slots with British Sea Power and Stephen Malkmus & The Jicks.  It’s a gentle indie pounder that moves along happily at its own pace, its intricate layers reminding of The National but with added atmospherics.  The building climax can be imagined as a backdrop to those HBO series end-of-episode montages.  Cavalry on Facebook

French-Canadian artist Charlotte Cardin is getting the plays with this soulful, dark electronic new single.  “Like It Doesn’t Hurt” shows plenty of promise with some playful beats and deep tones.  Her voice is soulful and contemporary but it is sadly reminiscent of several other female voices out there right now.  The guest appearance of Husser is either an unwelcome interruption or an effective contrast depending on your mood, the rapped section taking the song away from the comfortable and into a new place.   Charlotte Cardin on Facebook

Written By
Paul Davies
More from Paul Davies
September sees a range of high-profile releases from established artists such as...
Read More