SXSW 2014
Covering SXSW 2014 for Fourculture Magazine was the best assignment ever. Attending Sony’s “Heart of Austin” Showcase to see Monte Pittman perform was probably my personal favorite moment, but let’s be honest, every moment of it totally rocked.

ScreamCreature
The debut EP, ScreamCreature, by the band of the same name quickly claimed a spot on my favorites playlist. A passion project of Chris Culos, the drummer of O.A.R, his brother Robert, and their friend Danny Chaimson, ScreamCreature is alt/indie rock at its finest. Favorite track: “Wake Up Child”

Horizons by Kris Allen
Released in August of this year, Kris Allen’s third album gets it right by keeping the focus on his songwriting and his voice. If I had to pick a favorite song, it would be a three-way tie between “In Time,” “Lost,” and “Prove It To You.”

Triple J’s “Like A Version”
“Like A Version” – a Friday morning segment on Australian radio station, triple j – is my guilty pleasure. I love watching video of the musicians and bands that come in to play, live in the studio, one of their own songs and one cover of a song they love. To my mind, a great cover is not when a band manages to sound just like the original. Rather, a great cover happens when a band takes a song and makes it their own. With that distinction in mind, my favorite “Like A Version” covers of 2014: 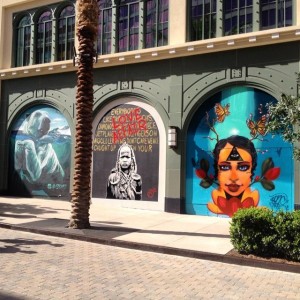 In August, I went over to the Linq on the Las Vegas strip for a Chromeo show. It was my first time in the area as it just recently opened up with the edition of the High Roller observation wheel. Come to my surprise there were murals everywhere.  I was captivated.  The Linq mural project is one of the largest, if not the largest street art project on the Las Vegas Strip. It has been put on by the ISI group, Industry Supporting Industry. It was established in 2011 to unite artists the general public may over look on a daily basis. Phase two of the project began December 6.  For such an amazing display where millions of people have the chance to view the local artists at their best, I have to give up my first my four to ISI for the Linq mural project. If you’re ever in Vegas, stop by! I hope to have the chance to bring these artists to Fourculture in the coming year!

In the Studio with MJ seminar

Next up, in June I had the experience of a lifetime. I took a trip out to LA to attend the In the Studio with MJ seminar. The seminar hosted by longtime Michael Jackson engineer Brad Sundberg immersed you into what it was like working up the magical music that Michael Jackson created. As a lifetime Michael Jackson fan, the seminar took me where no documentary has taken me before. You feel the emotion; you hear the stories that only those who were there could tell, you see the magic unfold before your eyes.  Truly an experience that an MJ fan or fan of music in general should not miss.  I’ll be back in 2015 for sure. In 2015, Brad Sundberg will continue with the seminars on a global tour. You can check the website for a date near you.

The Controversy
I’ve been following these two talented folks for about a year and a half. The Controversy‘s most recent single “Two Voices” ended up catching my ear quite powerfully towards the end of this year. I had the chance to chat a bit about it last month as soon as their new album comes out, I’ll be first in line. 2015 is bound to be a huge year for Laura and Thomas.

Kid Kasio
I cannot say enough about Kid Kasio. I’ve been following him religiously since his time with The Modern. This year marked his return with the release of his collaboration with the Sanfernando Sound entitled “Letters of Love.”  Since it hit my ears I have played it virtually non-stop. I cannot wait until the new album hits my ears. Everything he’s written has done nothing but put me in a good mood. Something that really makes me love an artist for sure.

Peur
Peur is a band that has come from the womb kicking ass. These guys had me at the break in “This Will Destroy You”. I can not wait until they get some hard core road time logged because with the tightness they already possess, things are only gonna get even more wicked.

The Eeries
Fresh goodness from LA burst into the scene seemingly overnight. The Eeries got a single in rotation on KROQ, the biggest rock radio outlet in the US, and got signed by Interscope. They’ve have had an appearance on Late Night with Seth Meyers and managed to release an EP — rock, pop, touches of Nirvana and Violent Femmes meld like peanut butter and chocolate with the most amazing hooks. LOVE!

The Foo Fighters
The Foos are back with the most interesting project I have seen and heard in forever. The series Sonic Highways on HBO took them to a different city in the US each week they took up residence in a studio.  Dave went and interviewed the people that made the music in each city that made it the magical place it is. The history of the music is itself crazy wonderful and educational, but then Dave went a step further and wrote a song based on these interview one on ones. Scary brilliant. The whole piece is a gem but “Something from Nothing” is my obsession. Long live rock!

Nicki Minaj
I’ve been a fan of Nicki’s for awhile and this is her best record so far — personal, dirty, gritty and at times heartbreaking. She not only stripped away all the comic costumes, but her music as well. Even if you’re not into hip hop this is a must have, especially the single “Once” becasue I love it raw and dirty.

Jaani Peuhu
This Finnish artist has become a regular around here and I am thankful. Jaani has blessed us with a few singles this year as well as an awesome cover EP, but the big highlight for me is our interview with him in issue 11. We discovered what makes him tick and I’m looking forward to featuring his solo debut album in 2015.

neutronic
“Closer” is the haunting debut track from neutronic, a downtempo indie pop duo from the UK.  This track is starting to get attention on the blogs as well as the folks at BBC Introducing. Fourculture was all over it too, of course. I’m not sure what neutronic has in the works for 2015 but we’ll definitely be watching!

Electrosexual
Art Support Machine is the debut album from French-House producer Electrosexual and it’s awesome.  Fourculture’s Paul Davies described this album best in his review: “In these days of ‘loudness wars’ the use of analogue can often sound dated and while there are similarities at times to the early work of fellow European artists GusGus and Sven Väth this is a very modern soundtrack, a trans-Europe expression of nostalgia and identity where rhythmic motion evokes emotion, the machine guiding your human mind.” Check out his interview with Electrosexual here.

Drawing inspiration from influential industrial artists like Nitzer Ebb and KMFDM, “Push” is Vain Machine’s debut single on the Analog Trash label. The band began playing live shows in 2013 and was chosen to open for German electropop act De/Vision after just a few shows.  They’re putting the finishing touches on a full length album and I can’t wait.  We reviewed “Push” here.

[debut]
I’m adding a fifth artist to this list because [debut] is a big deal. Gareth Thomas is the man behind this amazing music and art collective. We had the honor of featuring him in issue 13 and I’ve been a fangirl ever since. This is an artist to watch in 2015 for sure, folks. His debut album, Postcards from Berlin, is expected this winter.