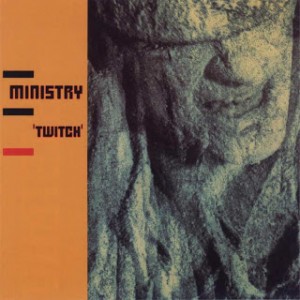 Ministry have evolved, perhaps more so than many other bands. Their sound has become unrecognisable from their formative years. When Al Jourgensen started out he was synthpop, more Howard Jones than Motorhead. That first album With Sympathy (known as Work for Love here in the UK), was commercial synthpop and radio friendly, adapted to the music trends of 1983. In the years since, Jourgensen has disowned it but it remains a firm fan favourite.

Ministry‘s second album Twitch three years later began to edge their sound closer to what we recognise now. Released 30 years ago this month, it is harsher, more abrasive and owes more to Front Line Assembly and Front 242 than to any of the synthpop artists of a few years back. It’s the first album that Jourgensen made use of sampling, something that has become a hallmark of the Ministry sound (as well as the turbo-charged guitar riffs and Al’s scream-singing). The production is still rooted in the 1980’s with it’s clean edges and sharp programmed beats but the element of grind is starting to penetrate.

Recorded in London, mixed in Berlin and produced by On-U Sound musicologist Adrian Sherwood, it was perhaps more Sherwood than Jourgensen, as Uncle Al recalls, “I was all new to this. I was just a mere tot at the time, taking it all in, and everything I know I owe to Adrian Sherwood for his direction on Twitch. However, I don’t feel like this one’s really mine because it’s so Adrian Sherwood-influenced. It’s grown in cult status to certain people as the ‘precursor to industrial’ or whatever the fuck they want to call it.”

Jourgensen’s voice is heavily filtered and distorted throughout giving it that familiar mid/late eighties industrial burr. This would be taken to the ultimate limit on the following album Land of Rape and Honey and in particular the track “Stigmata”, where Uncle Al’s voice could have been replaced with a circular saw going through a scaffolding pole.

Flitting between heavy, dark and aggressive industrial tracks like “We Believe”, “Where You at Now?/Crash And Burn/Twitch” and the brighter synthpop of “Over The Shoulder”, “All Day” and “The Angel” allows the record to be accessible to the pop music-buying teenager of the mid-80’s and just alternative, just heavy enough to please the growing legion of hardcore electro-industrial fans. Many of the Skinny Puppy and Frontline Assembly neophytes of the time enthusiastically consumed this album while Depeche Mode aficionados, looking for something different, slightly harder and darker also found this album to be a perfect alternative.

The album sits alongside Cabaret Voltaire’s output of the same period in particular Micro-Phonies and Drinking Gasoline. It sits just off the mainstream but has cross-over appeal certainly among the alternative club set.

This was just another signpost on the way to Al Jourgensen’s re-invention as an industrial metal titan. By the time we reach Psalm 69 in 1992 the reprogramming is complete and the gradual shift from industrial to metal is in full sway.

Written By
Mike Stanton
More from Mike Stanton
Three great tunes to ease you into autumn this week as we...
Read More