“My music is unique and individual and exists beyond the realms inhabited by those who would reduce things to mere measuring. I am in competition with no one. My relationship with my muse is a delicate one at the best of times and I feel that it is my duty to protect her from influences that may offend her fragile nature. She comes to me with the gift of song and in return I treat her with the respect I feel she deserves — in this case this means not subjecting her to the indignities of judgment and competition. My muse is not a horse and I am in no horse race and if indeed she was, still I would not harness her to this tumbrel — this bloody cart of severed heads and glittering prizes. My muse may spook! May bolt! May abandon me completely!” 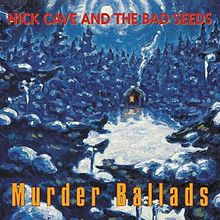 Any level of commercial success achieved by Nick Cave was more or less purely accidental. When the album Let Love In was released with Cave’s band The Bad Seeds in 1994 it included the track “Red Right Hand”, which later became the unofficial theme song to the Scream horror franchise beginning in 1996. That year especially proved to be a strange one in the history of Cave and company because of its series of brushes with pop-culture renown and mass media stardom. Twenty years ago on February 2, 1996, Murder Ballads was born into the world.

The idea that a morbidly diverse concoction of originals, folk-traditionals, and covers themed around death would catapult an Australian musician known for his connections to the punk and industrial scenes into the mainstream consciousness of the 90s is as unlikely as it is bizarre. It’s pretty much a no-brainer that when Cave started performing with his formative post-punk outfit The Birthday Party in the late 70’s he never would have envisioned himself on Top of the Pops with Kylie Minogue at any point in time. Still, Cave weathered the experience admirably and emerged without a scratch on his artistic integrity. It’s a feat few other artists of his caliber could have managed in such a seamless way.

Looking back at it from the perspective of 2016, the mythology that encapsulates Murder Ballads in a modern historical context meshes with Cave’s uncompromising career perfectly with an appropriate theatrical panache. The record itself is steeped in both obvious milestones, such as the introduction of longtime Cave collaborator Warren Ellis, and internet-fueled urban legends. There are stories floating around about Cave’s short-lived personal relationship with PJ Harvey, and speculation on whether their one-take music video for the collaborative duet “Henry Lee” sparked the affair (debatable from various sources) or whether Cave and his other duet partner Kylie Minogue got in contact for the first time via calling one another’s mothers (confirmed by Cave as true). Some stories are sadly false. “The Curse of Millhaven” was not deliberately set in the fictional town created by Peter Straub, that was merely a coincidence. So, does the record still hold up on its own today, hype aside, even when compared with both the earlier and later canon of Nick Cave’s work? The answer is a resounding yes.

Murder ballads are a genre of folk song I am not personally familiar with the definitive history of, but many of the tracks on this album are based on Cave’s interpretations of traditional murder ballads. Others are simply the product of his demented imagination gone awry. There are darkly comedic elements acknowledged by Cave and his collaborators that lend the album as a whole an undercurrent of cartoonish, maniacal glee that steers it away from pretentiousness. It’s also clear when looking back at interviews with everyone involved with the production of Murder Ballads that they all had a great time recording it. Once again, it’s that sense of subject-inappropriate joy that helps it avoid the funeral-dirge seriousness that might seem inevitable for a death-oriented concept album. Cave’s storytelling serves as a solid foundation for a macabre cast of characters that do horrible things to each other. There’s a definite cinematic quality to the entire piece. Weaving through a tapestry of evil and blood, we’re gifted with enough romance, betrayal, and melodrama to deserve twenty Oscars. The album’s lyrics are overwhelmingly visual: you don’t just hear Cave describe the knife ripping flesh, you see it.

To me, a standard track-by-track breakdown feels like a disservice to the integrity of the work. Nick Cave was brutally honest twenty years ago when he described to MTV the nature of his finicky muse. Would he be just as likely to turn her back on reviewers scrambling to dissect every aspect of such an inspired production? I’m not Nick Cave, so I can’t be sure. Another artist of passionate and mysterious integrity, David Lynch, was once quoted back when DVDs were a new invention that chapter stops made him angry because you don’t watch a movie the way you read a book. That’s obviously not true of a record, but given that Murder Ballads plays out so much like a movie, it might make sense in this case. Listen to it from beginning to end. Uneasy, building tension will start to sink in with “Song of Joy”. The graphic, visceral violence of “Stagger Lee” might inspire gut-churning discomfort. “The Curse of Millhaven” is hilariously demented insanity, while the lovely duets “Henry Lee” and “Where the Wild Roses Grow” show contrasting beauty and softness in tales of jilted lovers. The best way to experience Murder Ballads is to simply lose yourself in it. Clearly Cave’s muse bestowed upon him a bloody, exuberant gift for the ages.

Written By
Josh Valley
More from Josh Valley
The undeniable Patrick Wolf may have fallen off the collective radar recently...
Read More