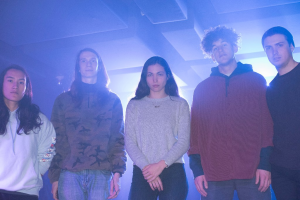 There’s something about Forth Wanderers that draws you in…

It could be their close-knit, ‘high-school band’ ethic, that has been in force since their formation  in 2013.  The New Jersey band members are now spread across the country while in their College years, yet despite the challenges of distance they have managed to write and record this full length album.

It could be their endearing awkwardness.  As well as their closeness, they possess a refreshing reality rare in a posed ‘rock star’ world.   You can drown in envy at their youthfulness and gawkish humility in the interviews in between performances in the excellent Audiotree session

It could of course just simply be the music which is a roller coaster ride in terms of emotions and structure.  Essentially their sound is a cross between influences, Alvvays and Mac Demarco, and they mix delicate with chaotic unpredictability which ends up as a bizarre hybrid of The Sundays and Deerhoof.  Labelling Forth Wanderers is futile though, there are so many intricacies that it’s sometimes hard to put your finger on what makes them so special…which brings us full circle to the first sentence in this review.

Either way, all of this makes you root for them and their new self-titled album doesn’t disappoint.

Previous releases gave hints at their potential, songs like “Slop” and “Paws” shone through while other songs had the tendency to meander.  On the new LP, despite being recorded over five days, there is more of a focus, a self-assured connection that you’d expect for such a close group.

Latest single “Ages Ago” is somehow summery and irresistible despite the heavinesss on the surface.  “Not for me”, the first release from the able is unrelenting, shrouded in a glorious energy.

As you’d expect from an album recorded over five days, it has a slightly raw, unpolished feel, but this chaos only adds to the charm and authenticity.  It’s not all high energy twists and turns though, “Be my baby” is a welcome change of pace, a weird trip of beautiful/ugly textures.

You get the feeling that this is a band that has found it’s feet despite the newfound distance between them.  It clearly isn’t a problem as there has always been an element of separation in the songwriting process with guitarist Ben Guterl sending music to vocalist Ava Trilling to add melody and lyrics to.  ‘The only way I can really write is by myself in my room with a notebook, listening to the song over and over again,’ Trilling says. ‘I’ve never sat down to write a story, I write the song as it unfolds.’

The dramatic musical backing alongside Trilling’s emotive lyricism is a winning formula.  Despite the youthfulness underpinning constant themes of self-discovery, the ambivalence of love and previous relationships,  it’s a mature album.  There’s a lot to get excited about here.

Forth Wanderers is out now.

Forth Wanderers on the web:

Written By
Paul Davies
More from Paul Davies
Scandinavia has really got it going on.  We’re obsessed with their detective...
Read More