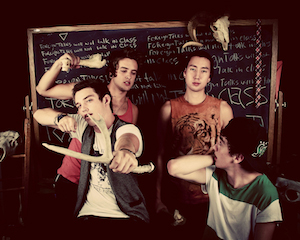 The boys of Foreign Talks — an indie-pop band from Vancouver, Washington — released their debut, self-titled album on April 16, 2013. There is a chance that the foursome might be offended at being called boys, but the simple truth is that, boys or not, these gents are going to break some hearts. The band is full of energy and boasts an all-over-the-place-and-in-your-face youthfulness that is not often heard or seen on the scene. Check the immaturity at the door; Foreign Talks might appear to be a quartet of youngsters, but they swing a big sound that will have one questioning how not a single member is over the age of twenty.

Let us meet these talented young men, shall we? The Fischer brothers, Marcus (18) and Madison “Maddy” (17), lead with vocals. Marcus has a vigorous voice that often rolls into a playful, gritty growl and Maddy has uniquely crafted and beautiful falsettos. It is evident that the Fischer brothers grew up singing together and their vocals complement one another quite pleasantly. In addition to lead vocals, Marcus plays guitar and bass, and Maddy plays drums and piano. On backing vocals are Kevin Downes (19), who plays guitar and drums, and Tanner Steinmetz (19), who plays guitar and bass.

The guys met in high school, jammed at a local music store, and formed Foreign Talks in 2011. After almost signing a deal with producers in Los Angeles, the band ultimately landed with independent label Expunged Records in 2012, home of such artists as Blind Pilot and Priory. They have written over one hundred songs and make at least two or three each time they practice. Their self-titled debut album is a collection of the tracks that the fellas deemed suitable for national consumption: “We picked the catchy ones that we wanted to get straight out into the world, for the fans,” admits Marcus. The album was produced by Brandon Johnson and Kyle Deiker of the band Priory and recorded at LoudWar Studios in Portland, Oregon, where the band blew up on the local music scene.

At just over thirty minutes in length, the album is evenly laced with mellow melodies and ready rhymes. ‘Hello,’ the seventh track, is easily a personal favorite. There is nothing better than a well-executed slow song and this song accomplishes just that (“Time will see what’s wrong with you, and time will reveal what’s wrong with you and me”). ‘The Spell,’ which is nothing short of spellbinding, rivals the latter as another favorite and after one listen, any set of ears will fall in love. ‘Northwest Wonka’ was referred to as “messy” by one reviewer, but cannot be further from the truth. While it might be all over the place, it serves as one of the album’s standout tracks and showcases the band’s eclectic style.

From the playfulness and whistling of ‘Santa Cruz’ to the fast-paced raps of ‘Falling Leaves’ to the apologetic heroism of ‘Mama’ (“Daddy, I’m going tall and I’m sorry I don’t play your precious football; It’s not in the cards for me; I’ve got a musical artery”) to the perfect closing track, ‘Save Your Energy,’ Foreign Talks does not fail to bring the freshness. The vocal style on ‘Stay the Same’ is almost reminiscent of Young the Giant’s popular track “I Got.” They have been compared to Local Natives and Bombay Bicycle Club, and at least two of Foreign Talk’s members would not be stranded on a desert island without BBC’s debut album.

Together, this four-piece can harmonize their adorable asses off, often creating almost angelic choirs. Their unique style cannot be limited to the indie-pop tag as it also contains a blend of hip-hop, rock, and elements of other genres. Foreign Talks, the album, might seem short at just ten songs and half an hour in duration, but it will require a second listen, and perhaps a third and beyond. Personally, I fit into the beyond category.

These boys are alive and raw with rolling music, and I believe it is fitting to call this raw rolling: rawling. That’s how they “rawl.”