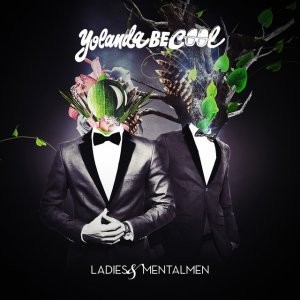 If you’re hopefully not hiding under a rock in 2010, you’ve surely got a taste of the Australian-based duo Yolanda Be Cool’s smash hit “We No Speak Americano.” Back on June 25th the band, made up of Sylvester Martinez and Johnson Peterson, finally dropped their debut album Ladies and Mentalmen for the lovers of electric dance music in the United States.

The name Yolanda Be Cool is an allusion to the classic movie Pulp Fiction where the character Jules (played by Samuel L Jackson) tells a female armed robber named Yolanda (played by Amanda Plummer) “Be cool!”  Though this album may not be the break into the mainstream that “We No Speak Americano” brought with numerous award nominations, it’s going to be right at home on the dance charts. To hit the ground running they have enlisted the work of a number of vocal collaborators which bring a unique edge, including Crystal Waters, Omar, and Betty Wright to name a few.

With a total of 19 tracks (including 6 bonus tracks) there’s a sprinkle of every element that makes Ladies and Mentalmen a dance album perfect for everyone. You have  heavy beats at 128 beats per minute and slower beats at 78 beats per minute. Can you say a “dance floor workout”? Not to mention the amazing vocals from pop up-and-comers, soul divas, and talented rappers. This album is certainly going to have Yolanda thinking it’s cool.

As I mentioned, the duo has a collaboration with the great Crystal Waters (best known for Gypsy Woman). The track titled “Le Bump” is one that really gives an element of what the duo is great at, taking a sampling of the songs and sounds of the early to mid-twentieth century and making them modern once again. With the powerful, soulful vocals of Crystal Waters you’re going to be doing the Charleston as soon as the track drops.

The guys of Yolanda Be Cool aren’t just one trick ponies; the track “To Be Alone” slows it down just enough to cool you down from the high-paced tracks. It’s not the happiest track in the world with the constant reference to not knowing what it’s like to be alone, though I find myself tempted to want to get closer to someone when I’m hearing it. With harmonies that bring chills, “To Be Alone” is a great last call song for those party animals out there. If Ladies and Mentalmen doesn’t break a dance chart in America, it’s not going to be cool in this Fourculture writer’s world.

Yolanda Be Cool on the web: