This is it friends of Earth and it is about time. This is the ultimate end-of-the-world prediction. In other words, this is the correct one, the one that makes you mad even to have thought of believing any of the countless others that have come before this one. In fact, we are writing this one knowing very well you will never read it because to prove we are correct we are writing this and publishing it after the world has ended.

Bold? Yes, because if you are reading this then something has gone very, very right and circumstances beyond our control have thwarted the end of the world once again. However, it does not mean our prediction was wrong, it just means that things we did not know about the world ending when we wrote this have stopped the world from ending. 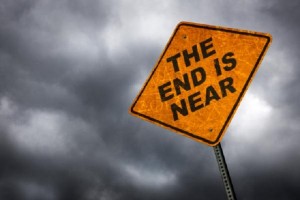 To prove this about us, we are issuing this end-of-the-world prediction for the first time. We aren’t taking pot shots at eternity’s calendar like other end-of-the-world predictors; we are making our end-of-the-world prediction the first and hopefully, only for one time because we happen to know (by know we mean pretty damned sure) the end is coming at a certain time. Everyone making such predictions before this one guessed by using secret messages from other dimensions, psychics’ weird visions and some say even from God. However, we know all of that is hooey. We know that what we know comes from the only source which can know—the Unknown Source.

Be convinced, be very convinced, that the Unknown Source is the only known source that knows the date of the end of the world. We don’t know where the Unknown Source is located or whether it is a deity of some sort or a supreme energy or a sacred mist or a blessed entity or a supreme mist or a blessed energy or, for that matter, if it is anything at all that we could comprehend with our puny finite minds. That being said, you can be sure we give you the best information that you will probably never read about the end of the world because the end of the world has already happened and we were correct accepting the message from our Unknown Source when we gave you the date. So, at last, (and last is exactly what we mean) it is about time the last time has come.

Before the last time came, however, many scientists thought the world would end when the star, our Sun in our universe, burned out and sucked the mass out of all of the planets, causing a vacuum or some other state that results when a star dies. Those people tried to calculate the cataclysmic event by using scientific facts and figures, history and other academic means. For instance, they were moderately certain that because the mathematics involved in the Sun burning out places the event a hundred-or-so million years from the day, that when they “ran some numbers,” so to speak, they discovered there would not be one member of the human race left as a witness. They added that even if some form of life were to occupy Earth, that form would burn to a crisp when Earth (and the other planets; can you name them?) was sucked close enough to the Sun, which, although it was burning out, would still have enough heat to render all things, living or otherwise, aflame. (They included all possibilities of life forms that may be able to live in what we now understand to be severely fatal heat conditions.)

In other words, the scientists (we have no idea how many of these people were involved in the research, though one insider put the number close to sixty, unless he meant that was their average age) figured the burned-out Sun theory was correct to the furthest point that their intelligence could take them, leaving only a slight percentage of the chances that may prove them incorrect and an infinitesimal percentage that any living creature would report its success or failure due to the high percentage of likelihood that all things would be incinerated.

Still, with every margin of error considered, scientists predicted other ways they thought the end of the world could take place. To save readers—should there be any readers, as mentioned previously in this, this final end-of-the-world prediction—we won’t reveal other scientific theories about how the world could end but we insist upon recognizing that none of them included any chance that our Unknown Source played a role.

Written By
Frank Cotolo
More from Frank Cotolo
Look, I don’t need to unwind any DNA from my system to...
Read More