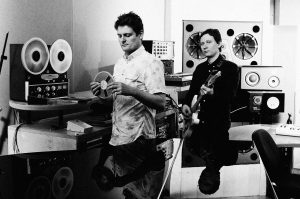 Mark Peters is probably best known for his work with British shoegaze band Engineers and his many collaborations. Here he teams up with Elliot Ireland, formerly of electronic duo Shaft, to craft a series of densely layered and atmospheric tracks. “Deep Blue” (released last year) is a beautifully balanced and languidly paced collection of songs and instrumentals that sits somewhere between ambient, dream pop and indie rock.

Following on from that album is a collection of remixes from some associates and collaborators. Five tracks have been re-imagined, re-tooled and remixed by some of the finest electronic and ambient producers around today.

“Oar” has the distinctive Ulrich Schnauss electronic texture and shimmer, driven by a wonderful central piano and delicate guitar riff that anchors the track as atmospherics and effects swirl and billow around. Schnauss ups the pace and creates something that appears to glide under its own momentum. Melody is key and the hooks turn and tumble with each turn. It’s all too easy to surrender to the enveloping fogged-out haze of ambience.

“The Aching Light” has been given some serious ambient treatment by Arovane and has become a deeper, dreamier track, resembling Bibio in their more fuzzed-out electronic folk-tronic moments. The vocals have been heavily treated and edge with distortion creating shifting patterns and textures over the pulsing ambience of the bass.

Jonas Munk has taken “Mountain Of Silver” and added a blissed-out cloak of ambient blurry rays and fuzzy shards. More than doubling the track in length Munk has created something that is so tangible, so heady and moving one is absorbed by the soothing synths and subtle, floaty beats.

“Deep Blue” was another song from the album of almost psychedelic folk with whisper vocals and understated production. Given the Engineers treatment it becomes so much more. Making great use of the space created in the original, it floats and drifts almost spectral-like into diaphanous clouds of ambience.

Clem Leek has taken “Secret Solstice” and completely re-modelled it from an up-tempo instrumental pop song to a warmer, slower and more expansive piece with each layer firing and flaring into reverb-washed orbit.

Bonus track “Cloudsurfing”, remixed by Engineers, closes out the collection. Using the indistinct vocals as an instrument, this drifts gently into an ethereal realm with expansive soundscapes and arpeggiated synths. This bonus track is only available until October 21st so grab this while you can.

This is a gorgeous collection of remixes that fully expand tracks from the original album and send them off into deeper and more expansive realms. It is apparent that each remixer has an instinctual understanding of Mark Peters’ and Elliot Ireland’s work and have beautifully re-interpreted the chosen tracks. This EP is a wonderful companion to the full album and offers something different, a new path through the dense and lush forest, a flickering weather pattern arcing to the horizon.

“Deep Blue Remixes” will be available digitally from October 7th exclusively via http://www.junodownload.com and on all other digital platforms as of October 21st.

Check out the exclusive to Fourculture video of the Engineers Remix of Deep Blue below.

Mark Peters on the web:

Elliot Ireland on the web: