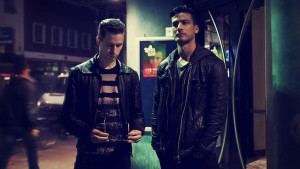 Empathy is an ability that we as humans may not be able to comprehend but we learn to understand others emotions. For the future-synth-pop duo Empathy Test, their power to make you feel the deepest emotions contained with the blackest of hearts cannot be missed.

Comprised of Londoners Adam Relf (production) and Issac Howlett (Vocals), Empathy Test has been making waves across the UK since their debut ep dropped in February of this year. With advertisement spots in ESPN UK and Liverpool FC it’s safe to say that 2014 has been quite huge for the duo. Throughout the latter half of the year the guys of Empathy Test have been slowly releasing tracks from their second EP Throwing Stones to much fanfare.

A fair warning, if you don’t like to be feeling anything when you listen to music then this album is not for you. The Throwing Stones EP is, without a doubt, the most melancholy electropop I’ve heard in a long time.

The EP opens up with the title track “Throwing Stones.” I was quite drawn to the track as the intro “twinkling” reminded me of the intro of Captain EO. Along with the heavy futuristic, sci-fi synth the song brings you into a classic tale of a failed relationship. The lyrics speak of an attempt at trying to get the ex-lover back even if it takes throwing a rock at their window just like in the movies. The dark low toned synthesizer really enhances the “I screwed up, please take me back” energy of the song. The thing that stands out the most on this track is I would believe it was 1983 if it wasn’t for the calendar next to me. This actually holds true for the entire album. The sound is virtually a John Hughes movie soundtrack. That isn’t a bad thing!

Then later on you are met with the darkest theme on the album in the track “Here is the Place.” The song covers what in the lyrics show are the final wishes of someone. Yes, we’re talking about what happens after death. There is something hauntingly gorgeous with the deep, bass infused synth along with the description of the way the roots of an old willow tree will hold him close after he is laid to rest. This is the first time I could equate death to being beautiful. The vision of the open field brings an overwhelming peaceful feeling and because of nature he will never be alone in the afterlife.

Empathy Test really took me for a loop with this one. It’s a hard time to make me emotional when listening to a song but this time I shed a couple of tears. There’s a real special place that Empathy Test will be going and that’s straight to your core.

Written By
Serena Butler
More from Serena Butler
I’ve had this unhealthy obsession with Penguin Prison since the Animal Animal/A...
Read More