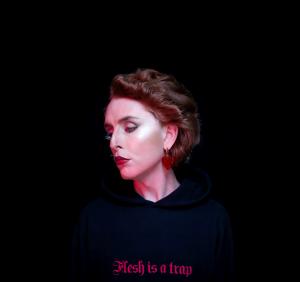 On the occasion of his new release on Berlin label Wicked Hag this week, electro-cabaret multi-faceted artist Alexander Geist shares his slice-of-life video of Any Instant Whatsoever and a few words for Fourculture’s readers.

“For this new video, I wanted to do something bold, experimental and collaborative. The track is actually extracted from a one-hour performance piece of the same name, which was presented in London for the And What? Festival. I recorded these new vocals in Costa Rica over the winter, then it was mixed and produced by Philip Cornett in the UK. Because we were working at such a distance the track took in a really elastic quality, we both felt free to push it to a point where you have to ask, “Is this even music?”

I thought that to match the mysterious quality of the track I ought to be absent from the video clip. Fabio M. Silva who stars in the video is a long time Alexander Geist fan. They saw us perform on tour in Portugal years ago and we’ve been friends since they moved to Berlin. Fabio is a designer and an artist, they’ve made clothes for me and I’ve modeled (anonymously) for one of their look books. It’s cool to have the kind of exchange that blurs the lines between fan/artist and creator/consumer.

The video was shot and edited by Sam Ratcliffe, who is the boss at my new label, Wicked Hag Records. This is our first time working together, and another thrilling collab. He just rolled with it, when I presented this track and the video treatment, he was game right off even though it is quite bananas.

For the accompanying image, I decided to work with Elis Hannikainen again. They shot the scandalous image which accompanied the single, A Woman’s Right to Choose. Elis and I are both very intrigued by the flexibility of identity and so naturally they were very interested in shooting the first portrait since I had cosmetic surgery. And of course, no team is complete without my beloved Sarah Hartgens and Attila Kenyeres who are the hair and make up team I most like to work with. We’ve really become a family now – I feel weird if I have to shoot without them!”

Watch the new video and get the new track as a temporary tattoo HERE. Alexander Geist tour dates will be announced soon on www.alexandergeist.com