If you turn on the radio lately, it’s safe to say that the music there is all sounding and looking the same. We need to go dumpster diving, it seems, to find fresh sounds these days. Luckily, Dumpster Hunter is here to save the day. New Jersey native/Brooklyn based Jeff Taylor and his band, made up of Mark Guiliana, Steve Wall, and Chris Morrisey, have been shaking up the scene in New York for a while. In January of this year they dropped their debut album Frustrations in Time Travel to show the public that they truly are a treasure in the sea of trashy music. We had the chance to speak with Jeff about the band and what’s coming up for them. Sit back and smell the fresh air — Dumpster Hunter is one band that does not stink.

The name Dumpster Hunter conjures many images.  How did you come up with the name?  Are any of you dumpster divers by hobby or profession?

The name Dumpster Hunter is the punch line of an unfunny alcohol-fueled inside joke involving a young high school janitor and his academically challenged girlfriend.  She’s 19 and struggling to bring up her GPA.  The two of them enjoy mostly-harmless games of hide and seek on school grounds after her field hockey practices.  One particular day, she hides in a school parking lot dumpster and he discovers her in the waste receptacle. 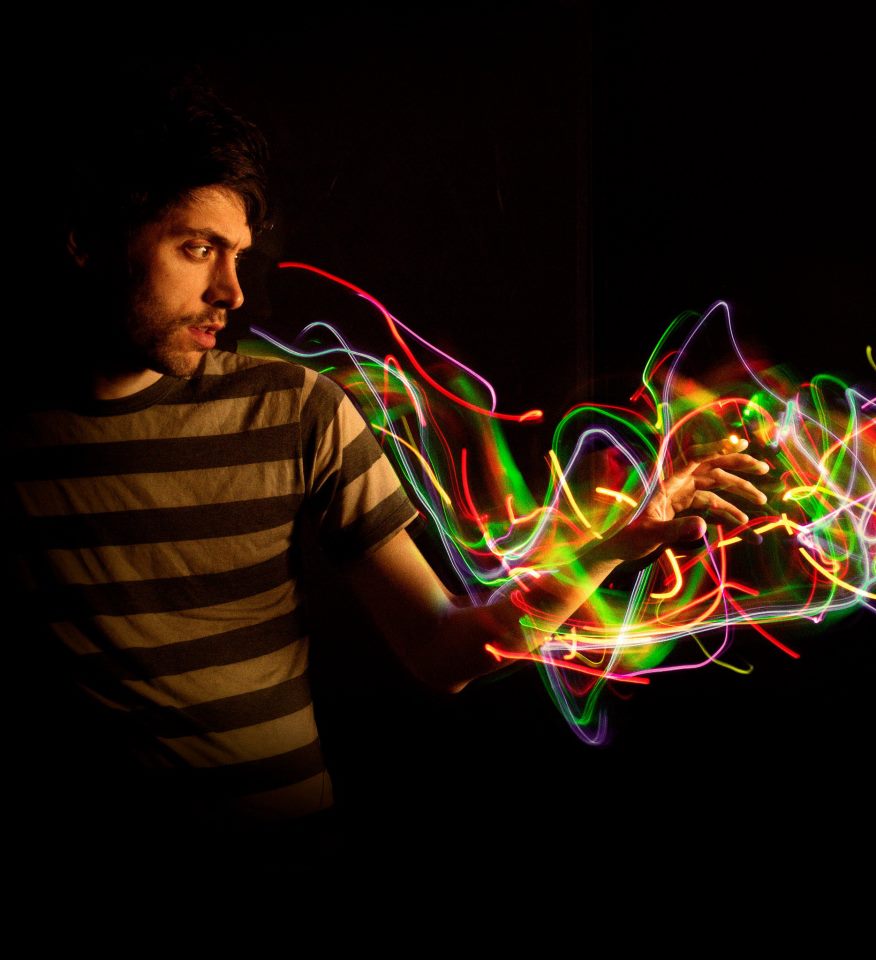 You’ve been described as a bit of a mad scientist when it comes to your musical creations. When you’re songwriting, what is going on through your head?  Do you agree with this mad scientist analogy?

I’m a big fan of the more scientifically minded characters in literature, film, television, and comics.  So it’s fair to say Dr. Octopus (Marvel Comics), Dr. Egon Spangler (Ghostbusters), Princess Bubblegum (Adventure Time), NSGS Geologist Jason DeCristofaro, etc have been my influences.  I love the sense of humor these otherwise bookish personalities naturally exude in their laboratories monitoring seismic activity in the Earth’s crust, out in the street, pulling off a big heist, saving their candy subjects from annihilation at the gnarled hands of The Litch, etc.  If I’m mixing up green-glowing magic potions in beakers at my lab, then they’ve got to be equal parts sincere emotional content and goofiness.

A few months ago your video for “Heart Hard” came out.  It¹s one of the most impressive videos I have seen from a band on an indie label.  Can you tell us how the video came about? Who was the mastermind behind the creation?

The “Heart Hard” video was conceived and directed by Kneeon.tv, a crack team of filmmakers and animators headed by Mike Healy.  A fantastic artist named Kelly Goeller was also involved in directing that clip.  The numbers on my prison suit are my late father’s birth date.  It was fun and I wish they had let me hold on to that tux.

We were the first, yes.  When Ken Rockwood, proprietor of the Music Hall, told me he was starting up a new record label, I trusted a positive energy I’ve had in all my past interactions with him and his associates.  The history of having played countless shows at the club, having been consistently well taken care of on those nights, and being made to feel an integral part of a strongly connected family of musicians and music lovers all made it an easy decision to move forward with Ken and the Rockwood Music Hall.  Unless you’re really special, signing to a major label is often a big mistake.

Speaking of Rockwood, you’ve had quite a few shows at the venue and have a tour planned for this fall.  What makes a Dumpster Hunter show unique? What do you want fans to feel when they leave your shows?

One acceptable feeling is the one I have when I leave a live show uncomfortably impressed by a performer’s ability to pull the rug out from under my comfort zone and sweeping me off my feet.

We hear you’ve been working on some new music.  What can we expect from the new material?

Yes, we’re working on finishing a bunch of new songs.  In between US and European tours supporting Trixie Whitley (check out her debut record, Fourth Corner.  It’s brilliant), I sequestered myself in a little apartment in Johnstown, PA for the entire month of January.  While out in Johnstown, I did nothing but write, record, listen to, and practice music. This sounds difficult to achieve for a struggling artist, but I found it just took ‘making the call’ to wipe everything else off my calendar and go for it.  The writing bore fruit and now we’re rehearsing a couple times a week to prepare for touring and recording this fall.  Come hear us play some of the new stuff at Cameo in Brooklyn on Friday, August 9th.  The new songs as a group have a more focused, homogeneous quality whereas the Frustration record is a more varied carnival of sideshow-vignettes from over a longer period of our lives.

Dumpster Hunter on the web: