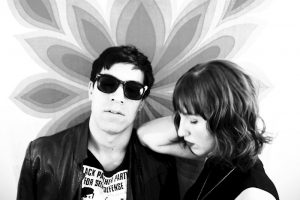 Californian duo BYSTS make a lot of racket, but it’s a nice racket.  Their new Dreamland EP evokes the rowdy spirit of Psychocandy-era Jesus and Mary Chain as well as some of the noisier shoegaze artists that followed in their wake.

Opener “Divine” is an intense wall of sound that won’t let you catch your breath and “You Get What You Give” is another frantic assault, recalling the best bits of My Bloody Valentine and The Raveonettes,

Sandwiching these is the title track which has more space – a sexy, swampy stomp with actual hooks and stuff. Both Bryan Holbrook and Stefanie Marlow provide layered vocal to add a human texture to the pounding fuzz.

These three songs were available only on the limited edition vinyl version of album Killer on the Road and now have been released separately.  You can get them digitally but a separate vinyl release is planned in the new year.

BYSTS on the web:

Written By
Paul Davies
More from Paul Davies
Growing old is something we can all relate to, and Bear Hands’...
Read More