Nico, icon and enigma. A definite influence on many artists yet much of her background is pieced together from half-remembered truths, semi myths and lies. Often these were created by Nico herself, weaving mystery and ambiguity into her persona as well as into her sound.

This week sees the re-release of Drama of Exile, her 1981 album back in print which has its own curious back story, once again made up of snippets of myths, ‘citation needed’-Wikipedia warnings, and potentially misleading sleevenotes.  Essentially there are two versions of Drama of Exile, three album covers, and a mass of ill feeling which stemmed from stolen master tapes, threats to sue, a manager also acting as dealer, and a lot of paranoia. More of which later…

Nico may be remembered more for her work in the 1960s and 70s, the tall German model finding her way into the lives of Brian Jones, Bob Dylan (who wrote a song for her) and Leonard Cohen (who wrote songs about her).

Andy Warhol claimed her as one of his Superstars and shoehorned her into The Velvet Underground to add a focal point.  Many people will know her from the three songs she sings on their eponymous album.  She was supposed to sing on more but Lou Reed took the potential hit “Sunday Morning” for himself. The arrangement was ultimately a Warhol stunt suiting neither party and only lasting for one album.

Her subsequent folky debut solo album Chelsea Girl is a charming period piece that is somehow both wistful and mournful, though Nico later distanced herself from this, wanting to forge her own identity.  Enter Jim Morrison who became a notable influence on her moving into writing her own songs and poetry.  This inspired three albums of minimal, bleak songs which were innovative and often unsettling. The Marble Index (1969) was described by producer Frazier Mohawk as ‘not a record you listen to. It’s a hole you fall into.’  This trilogy of albums were led by Nico on harmonium working alongside the likes of John Cale and Brian Eno. The darkness in her delivery acted as a key influence on the goth scene to follow, even supporting Siouxsie and the Banshees in the late 70s.

There was a gap of seven years between her previous album (1974s The End) and Drama of Exile although several of the songs were written in this period which saw Nico star in several Philippe Garrel films.

The supposedly ‘official’ version released in 1981 is the version re-released today and sees Nico back with a band.  This official version actually stemmed from unmixed versions stolen by the head of Aura records, Aaron Sixx who had received a tip off that they would be stolen by Nico’s manager (and dealer), Nadette Duget. 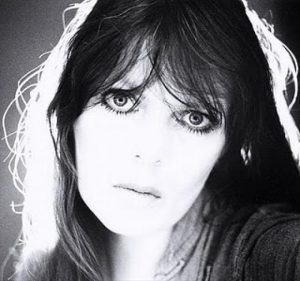 The band were naturally annoyed by this and set about recording them again. In the meantime Aura records released the first batch of unfinished recordings as the official release meaning the new, alternative versions had to be shelved.  More band annoyance followed with threats of lawsuits but they did see the light of day a year later (middle right image) on a French label and were packaged together with new single “Sãeta” and B side “Vegas,” although there was little coverage and Sixx tried to put a stop to them coming out.

On the new CD release of Drama of Exile we also get the ‘alternate versions’ of eight of the tracks, although annoyingly these are sequenced in the same order as the ‘official’ release rather than the order on the eventually released alternative album. The good news is you get the best of both worlds and the chance to compare the songs from how they sounded with the rawer, unfinished edge alongside those takes with a bit more polish and effects.

There’s an overall postpunk vibe and the album sits alongside contemporary releases such as The Affectionate Punch, Flowers of Romance, and Scary Monsters.

“Genghis Khan” opens the album and the manic, scurrying Turkish and Arabic sound she was after contrasts with her teutonic chant. (‘The songs are different from what I’ve done in the past. They are more oriental sounding,…Middle Eastern, Arabic or Moorish.’ she told ZigZag magazine) “Purple Lips” is a hypnotic, glassy treat, especially as it was not seemingly considered for the alternative album. “Sixty Forty” is another highlight, later covered by Broadcast.

Moving on to the bonus tracks and you wonder if the alternative mixes were the more complete versions, despite the fact Nico signed off the original official album (possibly heavily under the influence of heroin).  It’s certainly a more well rounded set of songs. “One More Chance” was the opener on the 1983 release and has a few more noticeable synths. “The Sphinx” follows, even more hypnotic and longer than the ‘official’ version.  The added polish also boosts “Genghis Khan”, adding a male vocal and “Henry Hudson” is much improved, a hazy brass section adds interest to a song that was rather dull and repetitive on the original and here it fades out too soon.

Nico also covers The Velvets’ “I’m Waiting for the Man” and Bowie’s “‘Heroes'”. These are brave cover choices and I’d have preferred “Saeta” and “Vegas” to be included over the Velvets cover although the alternative version of “‘Heroes'” is an improvement.

It is sad to say we will never have a complete or intended version of Drama of Exile. Many of the cast are no longer around to tell their tale. It is likely that your preferences of ‘take’ from each song will vary and there is no definitive better version. The Femme Fatale: The Aura Anthology (released 2003) has a disc called ‘Drama of Exile…Plus’ which has the alternative versions in the intended order and does replace the covers with the Saeta/Vegas single. Both versions of the album have plus and minus points but by being together the content and incomplete vibe back up the mystique around it.

Many artists of the 1960s and 1970s struggled to get to grips with the 80s, losing their edge due to increasing age or the polish of production. If you’ve made the mistake of thinking Nico fits in with this notion then the forthcoming re-release might be a good time to judge or reassess.

Drama of Exile is available on 6 August
Bandcamp link

Written By
Paul Davies
More from Paul Davies
Swedish/Iranian artist Ayelle has an EP out at the end of the month...
Read More