What does funky mean to yo 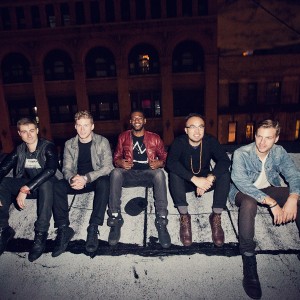 u? Is it that smell that collects after a few days not having a proper shower or taking out the trash? Is it that feeling when you’re just a bit under the weather? Funky music is something that will make you get up and shake everything your momma gave you. Today we have some real funky pop music to show you with DownBeat Keys latest single “Final Round”.

DownBeat Keys, comprised of Kadahj Bennett (KB), Baldwin Tang, Andrew Root, Ryan Calabrese, and Jared Schneider, formed the band at Hamilton College in 2008 and have gone on to share bills with Future, Bleachers, Passion Pit, Bon Jovi, and several other marquee acts.  “Final Round” is the first release since their critically acclaimed 2013 debut memory.chrome.

The track opens up with a very funky guitar strum… Then next thing you know you’re punched with a toe-tapping beat that begins the journey of ending the game of love between two lovers. The lyrics, “You’re an arcade when I’m with you,” makes you start to feel that this woman is nothing but a player, a human gamer out to do nothing but bend the world to what she wants. KB’s soulful vocals blended with a funky melody create a feeling of freedom as he sings that he’s just ready to get away from her and play his music.

When I first had the chance to hear “Final Round” I quickly thought to myself how amazing this track would be live. If you can’t see them live, then drag this track on the dance floor right away! The energy that comes across in their music shows that they have some FUNKY magic that will make you move and never want to stop again.

Written By
Serena Butler
More from Serena Butler
For a while now, I’ve been quite obsessed with virtually anything Kid...
Read More