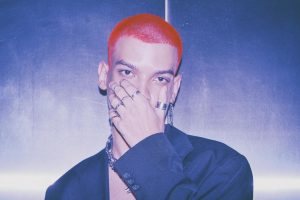 The latest single by VUCX has been released and it is a beautifully comforting darkwave nightmare. “Dog Teeth” features a dreamscape melody with VUCX’s soft vocals as it tells the story of someone who is trapped in an abusive cycle, clinging onto hope for brighter days. This while we also find ourselves in a moment where we are all trapped and hoping for brighter days.

“Dog Teeth” is VUCX’s second offering of 2020. This song is produced by constant collaborator, PEACEBLVCK, and mixed by former Holychild member, Louie Diller. Inspiration for this track came from Dogtooth, Yorgos Lanthimos’ 2009 Greek thriller (which you need to see). VUCX was influenced by the movie’s depiction of children’s bizarre dynamic with their father. “Something just clicked in me, I feel like in a way I have lived that life of having to prove yourself, fighting tooth and nail to then in the end still be stuck in an unhealthy cycle.”

When asked what’s up next for this artist, the path is somewhat unclear…and we find that kind of exciting.  What is clear is that VUCX is all about being authentic and upfront, so we might be going to a party or therapy with his new releases.  Rumor has it he’s got a vault full of new music ready to go. We’re ready.

The Artist D has been performing online since the mid 1990’s; a relic from the cam show age before social networking was a network, advocate for the rights of the underground, author, painter, columnist, raconteur, and provocateur. Catering to the freaks, geeks and black sheep of society, he makes the extraterrestrials of culture feel right at home on Planet Earth.