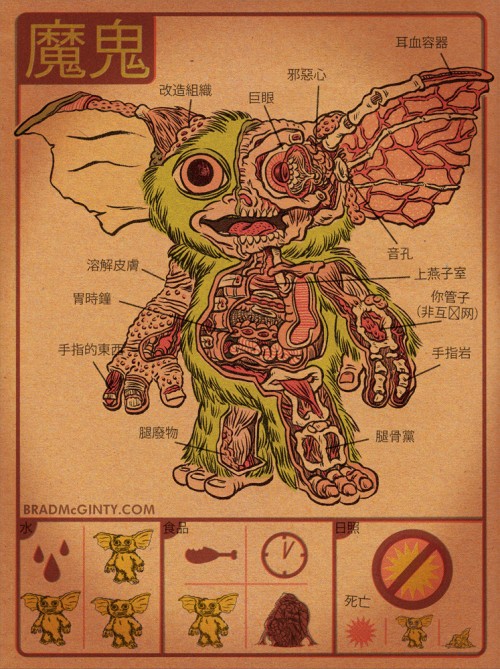 Have you ever considered dissecting a Mogwai to find out what in the world those little furry dudes are made of? Now you don’t have to! Minneapolis based artist Brad McGinty has done all the dirty work for you…Okay maybe it’s not all that dirty. He has actually reimagined famous movie creature’s insides for your own visual pleasure. By labeling them in some “interesting” Japanese (yes, he admits to using Google translate) you can see for yourself what makes some of the most famous movie characters work. You might be asking yourself how in the world one thinks of drawing creatures insides. Well, upon coming across his friend’s website post on a rare 1967 book illustrated by Shongo Endo entitled “An Anatomical Guide to Monsters” he decided to take on the challenge.

Okay, so what if internal organs of creatures aren’t your thing? He’s got cartoons for your viewing pleasure!  The cartoons include Man-Dar of Suburbia, a cartoon about reluctant hero that borderlines on being not safe for the work place.  Lastly, we can’t forget about Singing Batman. You can imagine that if Batman fell out of the superhero world, maybe turned into a drunk then turned into a wedding singer to afford the habit. That’s what you get out of a singing batman cartoon.

Lastly if none of the above is your thing, (you’re a complete lonely soul…KIDDING!) he’s got some interesting and creative comics that hit the funny bone perfectly. He hasn’t had a new one since 2009 and we’re hoping for new creations in the future. He’s got a very good tribute comic to Michael Jackson which unlike many comics on the King of Pop doesn’t hit on most of the crap that made the King of Pop so controversial. The comic hits on classic jokes about Michael Jackson, yet in turn hits on all the eccentricities of the fans.  Well done, Brad.

Yes there is of course much more to Brad McGinty’s work than that but we don’t like spoiling surprises. So checkout Brad’s work below and see what you think.  www.bradmcginty.com