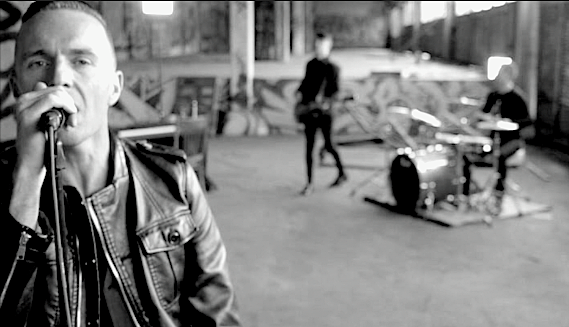 Today my favorite music and art collective releases Postcards From Berlin. Gareth Thomas, the mastermind behind [debut], has graced us with nine new tracks capturing what he refers to as a “cold Eastern European winter kind of sound”.  [debut]’s music dwells somewhere between the electronic and alternative worlds but there is a classical influence there…there’s synths, but add in some guitars, drums, a few stringed instruments and a haunting piano (all captured with plenty of reverb glory), and you’ve got the distinct sound of Berlin.

Gareth has nutured the idea of recording an album in Berlin for a few years. With the help of a successful Kickstarter campaign he was able to bring this concept to life. The album was recorded in Los Angeles as well as Berlin’s Hansa and UFO’s Studios. Recording at Hansa’s legendary Meistersaal was part of an important personal journey for Gareth. The neoclassical concert hall has hosted many greats of our time such as Bowie, Depeche Mode and U2, all of who have been a powerful influence in Gareth’s music.

In contrast from previous singles, you’ll find Gareth singing on the majority of the tracks on this album with guest vocalists Cyd St. Claire, Sammi Doll and Angela Bartys sprinkled throughout. There’s also something unique called the [debut] choir comprised of the voices of a few Kickstarter pledgers, which was an awesome way to get supporters involved in the creative process.

Postcards From Berlin is not for the dance floor.  It was designed to be a musical odyssey and your job is to sit back, turn up the volume and let the music take you to a different world…Berlin, perhaps. The album is intimate, dark and melancholy (“Low”, “Open Your Soul”) at times but there are bits of optimism scattered throughout evident in the soaring pianos and raw, industrial soundscapes (“Passion”).  It’s a beautiful experience.

I love this album.  If you appreciate the depth of Depeche Mode or IAMX, then you’ll be at home with Postcards From Berlin.