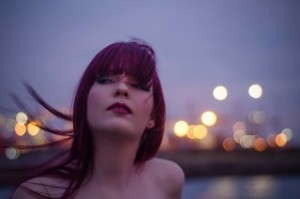 What is it with Melbourne, Australia at the moment? Is there an alt­folk revival gathering momentum along the south coast of Australia? Some kind of city sanctioned breeding program of talented musicians, born with an acoustic guitar in their hand and an eye for the lyrical beauty of the everyday? First we had Leah Senior, whose single review can be found on the website of this very magazine and now we have the equally talented Elise Cabrét.

Elise releases her debut EP, The Wrong Side Of The Blue on December 11th 2015 and I think it deserves your attention. Six tracks of acoustic goodness, lovingly augmented with piano, strings and electric guitar. A crisp, clean guitar sound that creates a subtle bed for some enhancing overlays and leaves room for the enveloping warmth of the storytelling vocal. Musically there is nothing new going on here and as such can be easy to dismiss on first listen. Especially if you are not giving it your full attention. However, if a genre isn’t broke there is no need to fix it and this EP is a wonderful addition to that tradition. There is a songwriting craftmanship here that exceeds the age of Elise herself, with enough variation in the songs contained on this EP, to make this reviewer at least, a fan.

All this and I haven’t even got onto the greatest asset of the mix, which is Elise’s vocal itself. A lovely, soft, heated blanket of a voice. In fact a warm, deep pool would be a better analogy. There is a ‘depth’ in her vocal that is quite compelling. It has a wonderful inflection that enables her to pull off the difficult trick of expressing emotion while maintaining the ‘disconnected’ raconteur vibe of the storyteller. Her lyrical style has been likened to Joni Mitchell, written in a conversational tone, as if talking to a friend. Indeed, with the EP containing the title of one of Joni’s albums, I can only presume she is a big fan. For me there is also a Nick Drake feel to these songs, where the vocal and guitar are everything and all other production is there to enhance those assets.

Now I am only to painfully aware that with banding (pun intended) artists around like Joni Mitchell and Nick Drake, that your expectations may be such that your listening experience is spoiled by the weight of the comparison. I only mention these titans in order to give you a reference, a hook to reel you in. This EP really deserves to be heard and judged on its own terms. It is one of the most accomplished and complete debut EP’s I have heard for a while. If you don’t like the alt­folk genre this might not be enough to change your mind, but if it oscillates your ear bones in a most amenable way, then you should find yourself becoming quite excited about an emerging new talent.

Written By
Mark Simpson
More from Mark Simpson
So how is the Christmas shopping going? Still frantically running around every...
Read More