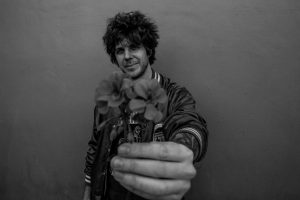 Successful songwriter & performer Dash Hutton has dropped the first installment of his solo artist project – an indie/alt reimagination of Big Star’s 1972 cult classic “Thirteen,” featuring Nashville’s Airpark. Big Star remains one of Hutton’s all-time favorite bands, and his friends in Airpark convinced him to cover it – as long as they agreed to help make it. The result is a moody indie ballad that should satisfy the palette of Elliot Smith + Wilco fans.

Dash Hutton grew up in Laurel Canyon in a musical family, tagging along on summer tours with his dad’s band, Three Dog Night. He cut his teeth playing drums in the world of Los Angeles rock bands in his teenage years, during which time he co-founded the band Wires on Fire. He went on to play drums in Haim, and tour with bands like Weyes Blood, Mini Mansions, and others. He’s also lent background vocals to artists like Van Dyke Parks, Jimmy Cliff, and The Interrupters, and is one half of the band The Grand Southern with Jesse Tyre-Karp.

“Thirteen” will be featured on Dash Hutton’s debut EP Canyon Hut Sessions, due out this summer. Check out the track + video below.