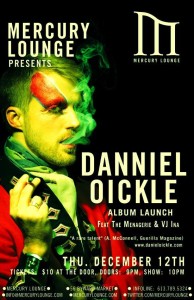 When it comes to the four pillars as covered by Fourculture magazine, there are few that seem to cover every aspect of creative culture. Ottawa’s Danniel Oickle is the complete package. Today, he ushers in his second album entitled Blitzkrieg at Ottawa’s Mercury Lounge.

The album brings together a potpourri of genres making the album perfect for all music lovers. With Danniel’s moody “pop meets jazz” edge, he gives a great slow down spin on his own take of Marilyn Manson’s “The Dope Show” and Marcy Playground’s “Sex and Candy.” If covers aren’t your thing, he’s got an array of original tunes to tickle your eardrums… from the very prince-like “The Bed” to the down south, seemingly straight out of a True Blood soundtrack “My Heart Has Teeth.” Blitzkrieg really does have something for everybody.

Danniel has stated, and it is evident, that the album is broken down into two parts: The Attack and the Aftermath. In other words, this album brings you up and then throws you right back to where you came from in the most perfect of ways.

So what are you waiting for? The lightning war of music needs to get to your ears now! Check out Danniel Oickle’s art and listen to Blitzkrieg today!

Danniel Oickle on the web: