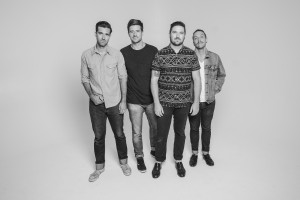 Daniel Ellsworth and The Great Lakes, an exciting four-piece indie rock band out of Nashville have released their new EP, Bemidji. The band, well-known for the type of synth-heavy, high-energy guitar rock that gets your fingers tapping and feet moving, has been featured on the pages of Fourculture before. And while Bemidji certainly delivers hook-filled tracks with a kinetic beat, it also reveals an edgier, darker, more guitar-driven, indie-rock vibe than the band has displayed before. Bemidji is a brief glimpse into the band’s evolving sound, one that whets the appetite and leaves you wanting more.

The EP derives its name from the small cabin in Bemidji, Minnesota, where the band spent a week writing the five tracks. And just like their sophomore album Kid Tiger, all the songs on Bemidji were tracked live and mixed with Vance Powell (Jack White, Chris Stapleton, The White Stripes) at Sputnik Sound. The band sees this EP as a kind of sonic bridge between Kid Tiger and their next full-length album — one they have already begun to work on.  Bemidji’s sound develops a deeper, darker dimension with every track.

The first two tracks on the EP, “Always/Never” and “Get Mine” were also the first two singles. Both tracks are high-energy, feel-good tracks that would have fit comfortably on the Kid Tiger track list, with “Get Mine” having more of an indie-blues-rock vibe. But then the next three tracks take the elements of the band’s signature sound to a slower, more melancholy place. Ellsworth says, “[T]hese songs showcase a few different sides of the band, including a couple of slower tracks…” The EP’s third track, “Like Clockwork,” has everything fans expect from DE&TGL — prominent keys, heavy drums, dirty guitars, and Ellsworth amazing vocals — but, pieced together in a more slowed-down, bluesy way.  “The Surface” is a gorgeous piano-driven track that has a dreamy, other-worldly vibe. It perfectly complements the song’s lyrics — about running away from everything to just lie with the one you love — that Ellsworth croons, oohs, and ahhs through in his amazing voice.  Closing track, “The Line,” uses piano, guitar, and percussion to play off and augment Ellsworth’s vocals to create a sad, slow song with just enough swing and sway to keep it from becoming maudlin.

Bemidji reminds us why we originally fell in love with this band. It wasn’t the powerful tenor and clear falsetto of frontman Daniel Ellsworth or the band’s impressive instrumental talent. And it wasn’t the songwriting chops or the energetic live show that create one irrepressible pop-rock-dance tune, with addictive hook-filled choruses, after the other. What sets this band above so many others, and the reason we love them, is their ability to weave all these elements into a cohesive, perfectly balanced whole that is somehow greater than the individual parts. With Bemidji DE&TGL has served up notice that the band has depths they’ve only just begun to explore and are only going to get better.