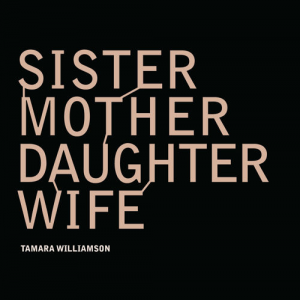 Storytelling is often forgotten in the art of music.  Using music to pass on stories and folk-tales from generation to generation has been an essential and vital part of human history.  It is refreshing to find a new album with this emphasis in a musical climate awash with big production and autotune.

Canadian alternative-folk artist Tamara Williamson presents ten songs with the stories of different women portrayed within them. Sister Mother Daughter Wife isn’t easy listening due to the subject matter, focusing on victims, outcasts, and those voices that should be heard yet are often suppressed.

The nursery rhyme-like “100 and counting” is a case in point, probably one of the most sinister yet compelling songs you will hear all year, its simplicity leading to your own interpretations of what has happened to the ‘girls’ who are the subject.

Opener “Who’s next” is a similarly dark piece, simple grungey acoustic riffs evoke the perfect mood for a woman looking for an escape with minimal hisses and claps and repeated lyrics forcing home the seriousness of the situation.  Who will be next in a long line of victims?  It examines the pressures and impact of speaking out against abuse.

When the voices of others are portrayed through Art you wonder how much of the artist is within the piece.  These are stories that Tamara Williamson felt should be heard and her voice is not overbearing and her occasionally imperfect delivery adds to the fragility and the realism of the situations she is singing about.  The music is often understated as it is all about the words but it adds to the drama with enough variety.  The change of style halfway through “Chantal” gives a new mood, and the cellos in “Rebecca” give it a 60s folk feel.

This isn’t background music.  It’s an album to listen to, to explore, to think about.