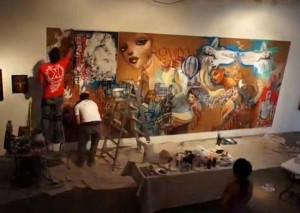 Howard Kan is one of those artists that average people may not actually think of as an “artist”.  He’s a photographer and a videographer.  He plies both those talents capturing images and sounds of other people plying their talents.  How is that creative?  Don’t most people have, at the least, a cheap camera that they take with them to photograph buildings, other people, events and works of art while wandering around the world?  Is that art?  Essentially yes.  But like all art, not all of it is “good” and not everyone has a real talent for it.  In my view, great photographs and videos are well balanced, set a mood and create emotions.  Howard does that for me.  I share his awe at the macro still-shot of a bee in all its intricacies.  I feel the whimsy and sometimes the challenge of watching two of my favorite painters working out a mural.  My heart is in my throat watching the tricks and skills of skateboarders careening down an L.A. canal.  Howard also has the knack for pairing the perfect music with his videos thus taking the art to an even higher level.

Howard Kan is originally from Carrollton, Texas. He moved to L.A. the summer of 2005 and attended Cal State Dominguez Hills in Carson,CA and received a BA in Digital Media Arts and Digital Graphics. Kan was always mesmerized by skateboarding videos as a kid. When a friend started a skate bearing company Howard started shooting video to promote the riders sponsored by the company. The company prioritized networking with artists in order to throw non profit skate/art events.

Here’s the rest of his story in his words:

Michael Pukac and Max Neutra were the first artists that supported our cause. Pukac asked us to come shoot at The Do Lab’s Valentine’s Day event where there would be a 5-man collaborative mural. After shooting this initial event, Hans Haveron picked up on my determination as a cinematographer and asked me to join his team. After this event I began covering his live painting collaborations with John Park. My first time lapse project was of their mural “Metamorphosis” which was a live painting at Electric Daisy Carnival that took three days to evolve. It was an incredible experience and from looking back on it I see how far I have progressed since that shoot.

I have also developed a relationship with The Do Art Foundation, which is a non profit focused on funding educational art projects. I’ve had the opportunity to shoot many live painters at Lightning in a Bottle festival and got official coverage for their project Lightning in a Paintcan. The festival culture has inspired and blessed me with the experience of meeting artists that utilize different mediums and have many different styles.

Time lapse has always captivated me. It provides a whole new perspective by showing the dimension of life that is usually taken for granted. For example most people wouldn’t sit for hours staring at a flower watching it bloom, and if they did the change wouldn’t seem so drastic. John Park always mentioned that seeing his art transform at such a fast pace is so rewarding. It’s the instant gratification that captivates the viewer. I’m not sure how to describe the learning curve but I do know that I’ve learned something new from every shoot. I feel like there is never ending potential for developing my own style and techniques. Over the years I’ve figured out a few ways to manipulate camera/lens settings to create in camera effects. My first year of editing relied on plenty of post production effects and transitions. Since then, I have been repelled from that look and try to develop my own grammatical structure in a sequence. The saying there is a time and place for everything also applies to editing. I try to ask myself if certain filters or transitions serve a purpose before throwing it on my timeline. The next step for me is to integrate motion control to my videos. All of the videos I’ve shot in the past have been static, meaning from one position. Motion control allows for smooth movement while time lapsing. The system can program the camera to pan, tilt, and move in a direction all at the same time. Shooting stills has helped me become more conscious about how I compose a shot as well as the depth and tonal values.

I prefer shooting video because I feel like it is one of the most powerful forms of communication. Compared to a still, video provides motion and audio. This synthesis has created a form of visual language. I based the name of my company on that idea. The word or language is primal and with the advent of digital imaging systems, the meanings or values of thousands of words can be told in one scene.

I was drawn to the macro lens by watching nature shows and documentaries. I’ve adopted the philosophy of using photography/video to tap into realms that are all around us but not commonly appreciated.

I have a time lapse video coming out soon of a mural by Hans Haveron called “See Dream.” It can be seen at the busiest intersection in Santa Monica (Pico/Lincoln). We are planning more projects for the organization Beautify Lincoln and seeking sponsorship from the Ocean Park Association. Please visit my website to view my portfolio http://wrdmedia.com and follow me at http://instagram.com/wrdmedia#