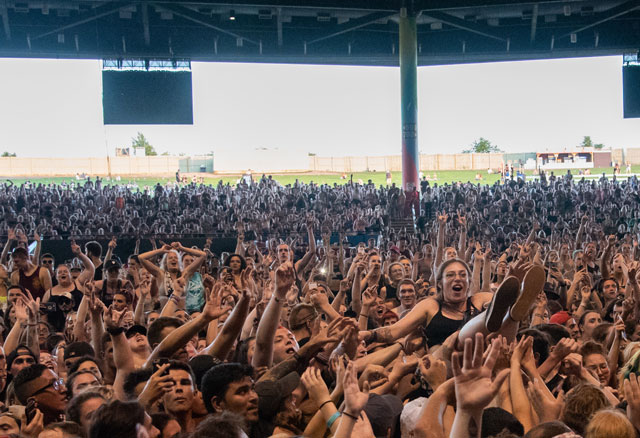 Music is a physical, group participation sport that’s just plain fun.  You’ll experience it at most live shows but you’ll definitely be a part of it at the Vans Warped Tour. 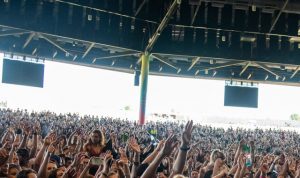 The unique part of these activities at Warped is that there are many different genres of music, the fans that go with these genres and the fact that these groups crossover all day long.  You could see a group of friends heavy-duty moshing to hard-core and later see a couple of them just doing some body-swaying, hand-waving to pop-punk.  People arriving early to the stage for the next band find themselves drawn into what is currently playing and their bodies just instinctively give in to the physical reaction that music makes them feel.

This year at the Hartford stop there was a big change of stage locations.  In the past, the stage in the amphitheater was divided and used for two medium stages which would have been designated for Mutant Red Dawn and Mutant White Lightning this tour.  The weather reports just prior to 7 a.m. led to the decision to bring the main stages inside.  This situation saw a lot more mixing of crowds as there was less room to spread out.  Some bands even commented from the stage about the people who were actually waiting for the band that would perform after them.  Having spent the better part of my day in that space, most bands did a pretty good job of getting everyone to “play along”.  The location also created the dynamic of kids that were up front in the pit and those of us that were out in the theater.  Many up in the seated area took a seat while others stood for their bands and danced at their seats.  But even those who were just too hot or tired still participated by clapping, waving arms or doing some form of sit-down dance. 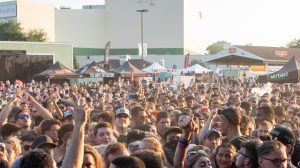 However it was done, we all played.  We all became part of the experience.

One of the biggest worries with the ending of Vans Warped Tour is where will any of us go for that kind of all-day event that offers bands and artists we know well and introduce us to up and coming musicians?  Where can we stand in line for a scheduled signing or just run into a band member while checking out the merch tents?

Warped offered an experience that was attended by all ages from toddlers to grandparents.  Those of us who have attended even one Warped tour stop are now charged with keeping our eyes and ears open and then telling anyone and everyone about upcoming shows in smaller venues in the area.  We invite as many as we can to come out and play because we just know that once you’ve been part of the “game” you just want to keep playing.