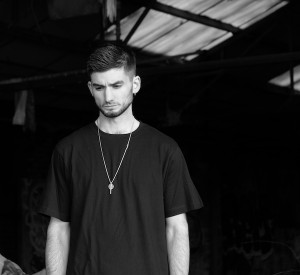 At times it is a little abstract and unconventional with songs taking a while to kick into life (“Illusory”) but when they do they are worth the wait.  Cold Courage is in control and provides plenty of changes in each song just when you think you know where it is going.

The seeming calm of intro piece “Aftermath” builds gently with only a hiss of white noise hinting at the semi-violent mid-section recalling These New Puritans.  Title track “Her” has an ethnic vibe similar to Gold Panda but again a rush of aggressive fx haphazardly intrude and eventually settle into the song taking it elsewhere.

Pick of the batch is “Brother”, which has more of a female vocal throughout.  Affected, glitchy, reversed, or all three, its texture is calming yet there is still the threat of chaotic change around the corner.  Unlike some of the other fragmented vocals on the EP, this is more Stumbleine than Crystal Castles.  It is usual in being Cold Courage-unusual but there is more of a conventional beat and bass in the background.

Sharp, unsettling and addictive, Her is out now.

Written By
Paul Davies
More from Paul Davies
Fourculture are delighted to bring you an exclusive premiere of the third...
Read More