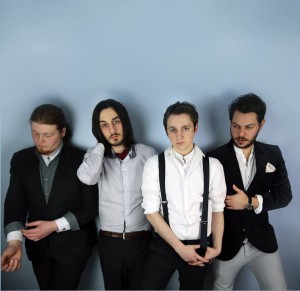 On September 8, Clockwork Radio, an alternative rock band from Wales (now based in Manchester), will self-release their debut album, No Man Is An Island, on Poly Tune Records – their personal record label. Previously, the band has released four EPs including genres from rock, funk, disco, folk, and afro-beat, to an all-acoustic EP. Clockwork Radio has toured extensively around Europe, including sets in the United Kingdom, France, Germany, Belgium, The Netherlands, Luxembourg, and Denmark, alongside such acts as The Prodigy, The Hives, and Bombay Bicycle Club. They have been known to play shows on rooftops, in the streets, in cafés, clubs, boats, quarries, and beaches.

Clockwork Radio began in 2007 in north Wales as a side-project of lead singer and guitarist Rich Williams. The first single, “Lost,” was promptly picked up for rotation by BBC Radio One, BBC Radio Wales, and other national radio stations. Soon after, Rich teamed up with lead guitarist Iwan Jones and relocated to Manchester to focus on music and forming a live band. The current line-up consists of Rich Williams on lead vocals and guitar, Iwan Jones on lead guitar and vocals, Sam Quinn on bass and keys, and Dan Wiebe on percussion and vocals. In 2011, Clockwork Radio became the first independent band to create a 360-degree music video for their song, “Please You.”

The band’s first full-length release, No Man Is An Island, was recorded over two days at 80 Hertz Studios in Manchester. The album features eleven tracks, including newly recorded versions of four previously released songs. Opening with a re-recording of “Feel It Up,” the album begins upbeat and fast-paced and carries with it the catchy chorus, “in the motion of your weapon and the fear of; every second that you’re waiting for draws nearer; and I find it hard to question my belief, but, by the second it is clearer.” This new version of the song is shorter than its 2012 predecessor, but is much more clean and polished, and Rich’s vocals sound infinitely more crisp and clear.

Next up is the album’s first single, “Fever,” which is easily the most radio friendly. “The Balance Of Water” is the slowest and most beautiful track on the album, featuring the Rhodes piano, some brilliant guitar work, and Rich crooning, “soon, life really starts.” The track “Sambei” is a short interlude of sorts, which segues prefectly into “Tacenda,” a short, but fun track. “Foxtrot Bravado” is a re-recording of a song from the band’s debut EP in 2010 that features amazing guitar riffs and psychedelic elements. “Moonstruck” is my personal favorite; it is another re-recording from the band’s 2010 debut EP and another slow track that utilizes the fuzzy guitar sound.

“Sitting Bull” is all over the place and has all of the makings of a great alternative rock song. “Rain” slows it down once more to state, “I’m too in love to change,” and features an awesome ninety second guitar jam at the end. “Sambei (Reprise)” is a second version of the initial interlude, though this time more focused on the vocals and altogether better than the original. The album closes on a perfect note with a newly recorded version of “Please You” (originally from the band’s 2010 The Soul Harmonic EP) that tells the listener, “I was born to please you anyway, I was born to meet you halfway.” Clockwork Radio’s debut album, No Man Is An Island, is sure to “please you.”

Look for our feature on Clockwork Radio in the next issue of Fourculture!