Those arriving at the Houston House of Blues Sunday night planning to buy a ticket for the CHVRCHES November 24th show were greeted by bad news:

There’s No U In CHVRCHES,
But There Is One In
SOLD OUT!!!

But for those of us who arrived with our ticket in hand, it was a promising beginning to a highly anticipated evening.  CHVRCHES, considered one of the year’s biggest breakthrough acts, was the subject of substantial hype even before the September release of their debut album, The Bones of What You Believe.  Formed in 2011, the group went quickly from a new band offering free downloads over the internet, to opening for Depeche Mode and headlining their own tour.  With such a meteoric rise, it would not be surprising to find the group still a work in progress.

But when the Scottish synth-pop trio took the stage amid a pulsating, flashing multi-colored light show, they did not disappoint.  In fact, with Lauren Mayberry on lead vocals, Iain Cook on keyboards and guitar, and Martin Doherty on synthesizers the group captivated the capacity crowd with their unique mix of dazzling electro-pop sound, brooding, nuanced lyrics, and the endearing, down-to-earth charm of the three band members.  To loud cheers, the band launched their set with the infectious dance track “We Sink.”  All around the room hands were raised in the air, fists pumping as the crowd sang along.  The crowd again cheered loudly for the next song, the popular single “Gun.”  Mayberry’s vocals as she sang the bittersweet lyrics sored above the crushing wall of synthesized sound.

The stage set-up visually reinforced the idea of Mayberry being surrounded by sound, the angled keyboards of Cook and Doherty set up on either side of the stage effectively flanking Mayberry at the center. The impressive light display behind the group, when coupled with the fog engulfing the stage, combined for an impressive, constantly changing swirl of colors that intensified the ethereal feel of CHVRCHES lyrics. 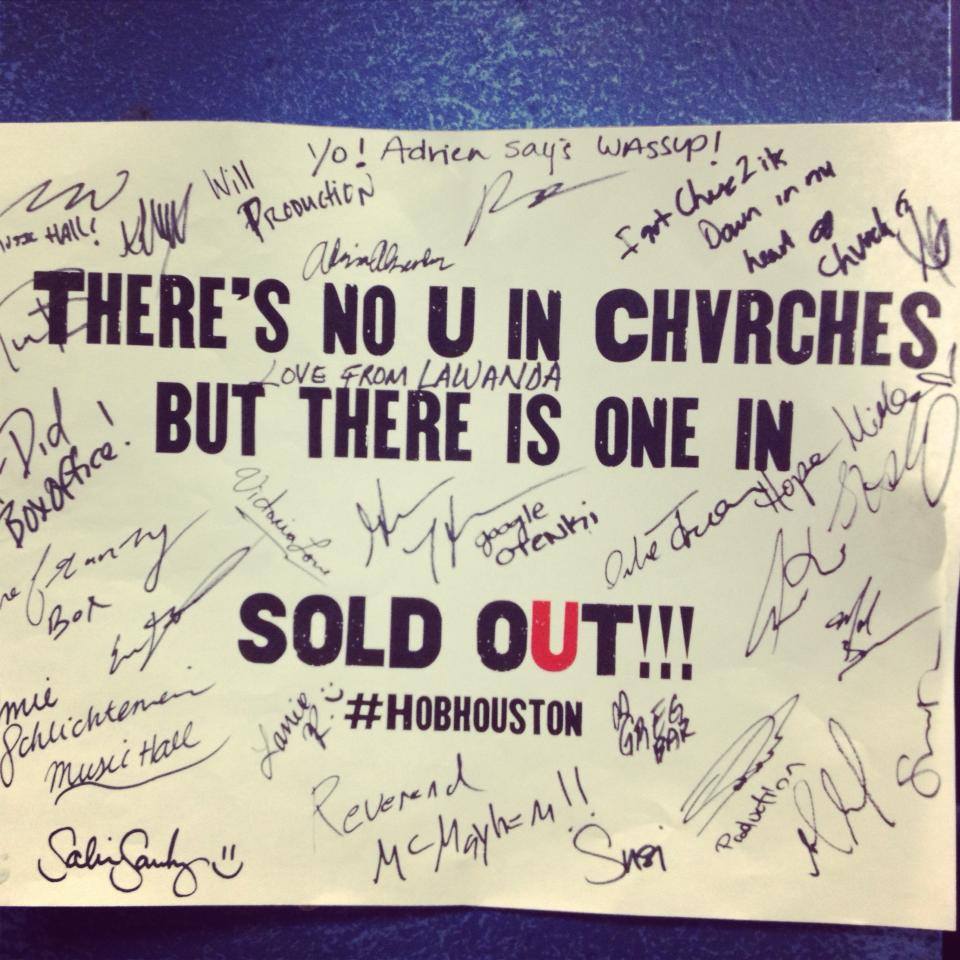 Mayberry chatted with the audience throughout the show and displayed a charisma and charm that was endearing. She told the crowd the group was particularly excited to be in Houston because it was the home of Destiny’s Child. (I can barely refrain from inserting an all caps LOL right here.) She told a funny story about how she misheard the lyrics in ‘Jumpin’ and thought it was something (explicit) and not ‘the ballers’ pockets, that was ‘full-grown.’  Keeping the crowd laughing, Doherty added his own praise for the girl group and sang a line from one of their songs as proof of their brilliance. These adorable moments were sprinkled throughout the set and worked to make the band even more likeable. The crowd’s enthusiasm only increased as the group rolled through a set that included the popular singles, “Lies,” “Recover” and saved for the last song before the encore, “The Mother We Share.”  The set lasted just over an hour and ended with “By the Throat” for the encore.

One of the highlights of the evening came just before the end of the show when Doherty stepped out from behind his keyboard and took a turn at lead vocals on “Under the Tide.” His unfettered enthusiasm was infectious – he danced wildly across the stage while belting out lyrics he clearly connected with.  It was not the highly choreographed dance number performed to perfection of today’s larger tours, but a musician feeling a song and letting the music move him. The crowd loved it.  Indeed, I would posit that it was not just the band members who connected with the music on Sunday.  Early in the show I noticed the absence of that ever present and highly annoying sea of camera phones above the standing room crowd.  Of course photos were taken and social media posts made, but during the evening a majority of the hands in the air were busy waving and fist bumping along to the songs, the crowd seemingly too busy listening and dancing to the music to record it. It was a welcome change to be in a crowd that was ‘present and in the moment’ rather than trying to text or tweet about it.

CHURCHES put on an impressive show.  With a limited catalog of songs from which to choose, the group was still able to give a polished and powerful performance with none of their songs feeling like “filler.”  There are a lot of more seasoned acts that have released a greater number of albums that can only wish they could say the same.  With the songwriting chops of this trio and Mayberry’s amazing vocals, I look forward to seeing this band perform in ever bigger venues for years to come.

CHVRCHES on the web: