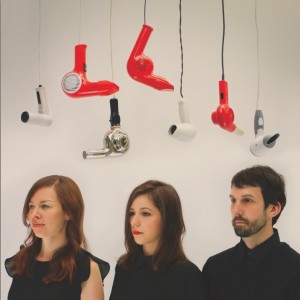 Chick Quest is a new band out of Vienna with an explosive indie rock sound guaranteed to make you want to dance — whether you’re with all your friends, just a few casual acquaintances, or home alone. In fact, writing a review of the band’s debut album Vs. Galore — set to be self-released in the U.S. on April 21st — was really hard. I kept finding myself hitting the laptop keys with one finger, not so much typing words as keeping beat with the tracks.  And that was only when I could actually stop myself from flailing my arms with abandon while bouncing my head and tapping my feet to the wicked bass lines and snappy percussion. I can’t remember the last time an album made me want to so badly say, “The hell with writing a review, I just want to dance to this!” It’s the sounds of 1960’s Italian Western film scores – sinister bass, twangy guitar, even the trilling trumpets — mixed with the dancey, frenetic beats, snark, and sass of the late 70’s and early 80’s post-punk, and an indie-rock aesthetic.  Seriously, this band’s sound literally just screams FUN!

Chick Quest is Ryan White (vocals, guitar, Rhodes piano, organ, programming and effects), Iris Rauh (drums), Magdalena Kraev (bass), and Christian Sonderegger (trumpet). The band began in 2014 when White, an American living in Vienna, and Rauh decided to create a live dance party band. They wrote a bunch of songs, added a bassist and trumpet player, played a bunch of shows, and within a year had recorded a full-length album.  The resulting LP is as layered in nuance as each track is layered in sound.

Of the eleven tracks on Vs. Galore three have already been released, including the first track “Somebody Call A Doctor.” It’s a great introduction to the album, using twangy guitar, strong bass, drums, and vocals delivered at a frenetic post-punk pace and an unexpected blast of trumpet to create an exuberant, explosive, dance track. The second track was also released as a single and it’s one of my favorites on the album. “Girl on Fire” opens with a clear nod to its Italian (or Spaghetti) Western influence with drums and a dynamite bassline layered with guitar, then followed by a clear, sharp trumpet sound that totally befits the soundtrack of a great Western film. And keeping the track from sounding trite or forced is a driving beat and a fresh spasm of noisy, electric guitar distortion. The third single and the fifth track on the LP is “I’m Tired of Pretty Girls.” It’s an awesome, sassy, song with an edgy B-52s vibe and deliciously snarky lyrics that pretty much demand to be sung, screeched and danced along to. It is another of the stand out tracks on the album.

In keeping with its nod to the Spaghetti Western influence, the album has two atmospheric instrumental interludes — complete with retro ’60’s vibe, sliding horns, thumping bass lines, and driving drum beats —that work to advance the listener’s overall journey through the LP, just as a quirky instrumental segment of a Western’s soundtrack advances the film.  The album is truly a layered and nuanced work of art, and this review wouldn’t be complete without a mention of my absolute favorite track, “Fashion Fascist.” This track perfectly mixes the post-punk vibe with the Italian Western influences to create a track that makes me want to throw my head back and flail my arms wide while I bounce to the bass beat and sway to the swing of the trumpets, guitar, and drums.

Vs. Galore is a euphoric, energetic, explosive and just plain fun debut album. And Chick Quest is a delightfully uninhibited group that mixes elements of seemingly disparate music genres to create fresh, fun, dance tracks that you can’t help but love and want to hear played loudly, and on repeat.