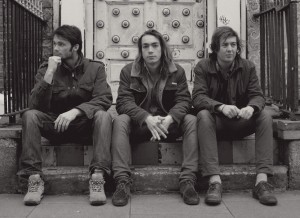 Two friends embarked on an adventure, traveling after they left school to Spain and back to their native Dublin.  The money they made for travel was whatever they collected from playing their music on the road.  Upon arriving home, Rob (drums) and Andrew (vocals, guitar) joined up with Will (bass) and after much experimentation, Censor the Beast was born.  On April 16, they released their first album: a four song exploration of creativity called See Through Skin.

See Through Skin, produced, recorded and mixed by John O’Kelly of Westland Studios, brings the best sounds together in an awesome package.  With a sometimes bluesy, sometimes rock sound with just a touch of folk, the band packs a punch in their debut.  With a resemblance to such bands as The Killers and with the charisma of David Bowie, it’s easy to find yourself bouncing to the band’s imagination.

The EP features four tracks. “Charlatan” is a song you would hear around a roaring campfire while “Heart of Stone” has a pure sound with rhythmic soul. “Real Boys” is the most resounding of the album. It’s a rock-infused song about giving inspiration and the challenge to stand your ground. Closeing the EP is “HOAW”, a unique love song featuring the impact love has on a man’s mind.

What I love most about this album is the unique sound. There’s a Celtic feel in this music with soul and passion evident in its lyrics. This is an album worth adding to every library and one you’ll enjoy keeping on repeat.  Don’t take my word for it, explore if for yourself.

See Through Skin is available on Bandcamp for download