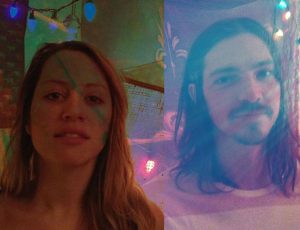 It’s ok to be late to the party.  Discovery in music seems to be all about getting there first, getting the scoop and delivering those smug ‘told you so’ glances when everyone else catches up.  Well we can do that now and again if you like, but isn’t it nicer to be fashionably late?

In the case of LA psych-dreampop duo Gibberish, their Kneehigh EP came out back in November but they’ve just released a single from it, “Gummi” which adds as a timely nudge if you missed them first time round.

Gibberish (Derek and Lorie Bromley) combine vocals on this track adding an extra dimension to their other-worldliness.  There’s a controlled abstract vibe as dreamy lo-fi sounds sweep around you.  It’s quirky and somehow catchy, being ‘…about our tendency to glorify our sense of nostalgia sometimes, and more the fact that it’s really okay to not do that,’ the band explains.

If it tempts you to delve deeper then you’ll be rewarded as the EP has moments which invoke the finer moments of  Animal Collective and Atlas Sound.  With a slightly surreal air, the songs weave together with snug spacey textures and occasional off-beat elements acting as a jolt to the senses.  “Feet wet” is an EP highlight, almost shoegaze in style, sweeping along nicely until a euphoric synth line lifts it somewhere new.

Highly recommended,  Kneehigh is out now.

Written By
Paul Davies
More from Paul Davies
Let’s not let summer get away from us so quickly! Here’s a...
Read More