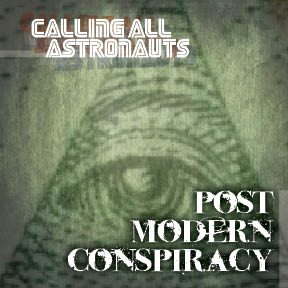 Calling All Astronauts release their debut album Post Modern Conspiracy on May 19th.  The album is self-produced by frontman David B at Supersonic Studios.  Post production received some assistance from Harvey Birrell who has worked with The Buzzcocks.  With a bit of pedigree and two years in the making, Calling All Astronauts are very proud of this record and eager to share it with the world.

At first listen there is a lot for this group to be proud of.  They have put down some great dark-wave compositions. They successfully mix real instruments with electronica and then stir it around with alternative, goth and dubstep to create the gritty atmosphere needed to for the lyrics to thrive in.  Those lyrics speak messages of the human condition both in the context of current events along with just overall day-to-day heartbreak, frustration and anxiety.  David B’s baritone vocals are the icing on this this black frosted cake.

Calling All Astronauts went the extra mile to get their current fans involved with the creation of this album.  They asked fans to take pictures of themselves with “C”s and “A”s.  The photos were then made into a collage that is the inside sleeve of the CD packaging.

alternative music.  Fans of AFI or William Control should give this record some attention.  The album will be available in over 750 digital stores and can be pre-ordered here.

Fourculture featured Calling All Astronauts in its debut issue. You can check out that feature here!