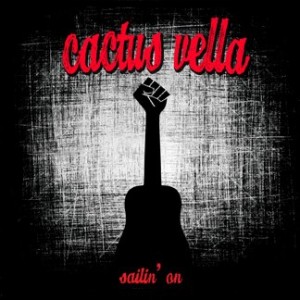 There are those who think “punk” is a certain type of music; heavy drum beats, loud guitars, anti-establishment lyrics sung by a drug-and-alcohol-laden lead singer.  Any true follower of punk and all that it means will tell you that is bullshit.  They know that there is so much more to it than that and refuse to be limited by such a narrow view, and really, isn’t that punk in its truest form?

One such artist is Cactus Vella.  A regular on the Toronto music scene since the 90’s, Cactus has spent his time playing guitar in some pretty hardcore punk bands, but went solo on a project released in December of 2012 when he recorded a 6 song EP of acoustic punk entitled Sailin’ On.  Stripped down to nothing but an acoustic guitar, harmonica, and vocals this album still oozes punk all over your shoes.

The voice of Cactus Vella surpasses raspy and heads straight to gritty which suits the music he has created perfectly and brings to mind some of the great folk singers of the past.  The songs are well crafted and the lyrics range from poignant, as in the song “Touch the Ground,” to respectably rebellious, as in “Summer Nights.”  The EP contains two covers; one of Johnny Cash’s “Let the Train Blow the Whistle” and “True Believers” by Bouncing Souls, both of which Cactus lends his own style to while still paying homage to the songs’ original roots.

For anyone who embraces the true spirit, sound, and lifestyle of punk, Sailin On by Cactus Vella is the album to add to your acoustic library.  It is available for purchase now on Bandcamp here  as well as on iTunes.