I always meet some interesting people when spending time in LA. Thanks to meeting Precious Child a while back, I met Daniel Crook, and thanks to meeting Daniel, I met his bandmate Burak Yerebakan. When planning this interview, we wanted to chat about music of course, but I also wanted to ask about the technicality of creating music… and then the lockdown happened, giving a new direction to our discussion. Burak will tell us more about recording techniques in YMA’s podcast on FC Radio in July but for now, here is our first recorded chat.

What has changed for you as a musician and for your band since venues in California have closed to the public?
Music brings people together physically as well as many other ways. You socialize, you come together to listen to music or make music. The first effect was losing this connection; not being able to be under the same roof with other people pushes you to invent other ways to connect with others. For writing and creating music, I have been mostly on my own since the lockdown but as a band, we started doing some online collaboration projects, live streams and quarantine live performance videos. We started hearing that some venues are going to start live streaming to the public from their actual stages, so besides doing solo performances in front of our phone cameras, which is the fastest and simplest way to connect to your audience at this time, we are preparing ourselves for possible live shows in a professional setting where we can still reach bigger audiences. Another good thing about this lockdown is now that people are getting the habit of doing video calls with one another or as a group, so that allows the artists to spend some time together and share thoughts which leads to working on new projects remotely.

And before this, what was the project you were looking forward to the most?
We were getting ready for a video release for our new single with some special performances with Crook throughout the summer. Now all that is postponed to a later date. We shot the video around December and while it’s been edited I have been working on the music production of the track. Also, we have been planning our new live show for the release including our new arrangements for our existing songs blended with new ambient pieces, accompanied by performers, dancers, and a new lighting rig. So now we are more focused on releasing the single and video online, which might still be a part of an online screening event. And we are working towards improving our livestream shows so that we can connect to more listeners until the venues start their live events again.

Would you say LA has been good or challenging for you as a musician?
LA has been very challenging and that’s why it’s been the best for me. Before coming here, my main purpose was to meet musicians who have the same kind of passion as me and make great art. But it has not been easy to find these people or even if I thought I found them, it wasn’t easy to stay connected and work on music together. Because LA is a difficult city, every creative person is working so hard competing with each other to reach their goals. The standards are high and you have to keep moving forward every day. 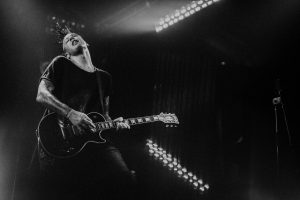 Soon after I moved here, I met Daniel Crook, and we became friends after I saw him perform as Crook (the band) several times. Not long after we jammed on some tunes together, he offered me to join this project and play guitar for the live shows since their guitarist was no longer with them after they moved to LA from Northern California. We played a bunch of shows, and eventually, we sat down to write some music together. Daniel is a great songwriter and he has many stories to tell, while I have mostly improved my skills as a music producer, so it didn’t take us long to realize that we could be a successful creative team together. It has been very challenging in the beginning because we are both coming from very different disciplines, past, geography, culture, and many things. We didn’t understand each other very well first, or we couldn’t see a way to make it work smoothly. But the passion in our work and the potential we saw kept us pushing forward. Eventually, we became more connected as friends, as musicians, and as team players, which made us more productive and efficient. We both have very different qualities, while Daniel takes care of the visual side, I am more audio and technicality oriented. He focuses on the aesthetic more while I make sure everything is working towards our goal more analytically.

Can you tell us about your plans in LA and online?
The lockdown seems like it’s going to stay at least a few more months in some capacity. We are planning to release our single Playing For Keeps with Crook early September alongside with some visual content that we have been working on. My other band, Yard of Blondes, recently just got signed with a record label, and right now we are recording live performances of some of our songs from the upcoming album, which is going to be released as an EP around July. Hopefully, we will be releasing at least one more single in the fall from the same LP album that is to be released at the beginning of 2021. Besides all of my bands, I am working with various artists as a producer or a mixing engineer from my studio and they have been releasing singles. I usually post a lot about this news on my social media accounts, and you can catch me performing improvised sets on Crook’s Instagram Live – we usually announce them beforehand. I will also be sharing more content shot in my studio The Wakeful Room, such as live performances and Q&A’s in the following weeks. So stay tuned and I hope you enjoy all the new content.

More about Crook on Bandcamp, and more about the wakeful Room on www.thewakefulroom.com.