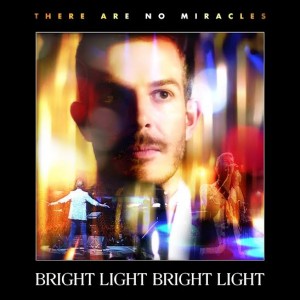 The lead single “There Are No Miracles” is an upbeat modern disco track with a deep meaning. Yes, disco songs can have a meaning beyond just taking you to the local discothèque. The lyrics deliver a punch with the underlying meaning that you are the one who makes good things happen in your life, not some magical being. “Tell yourself it’s alright; Take your time to make you better; Keep your tears out of sight!” With the bold empowerment behind the lyrics like that, the song can also translate into a bit of an anthem of self-love. Something many of us could use every once and awhile.

If the title track isn’t really your thing, there are three live tracks included on the EP that really give you the immersive experience (“Disco Moment” [Live at Portland MODA Center], “Cry At Films” [Live at Seattle Key Arena], and “I Believe” [Live at Denver Pepsi Center]) into what it would like being at a Bright Light Bright Light show. As a side note, I’ve heard some really terrible live tracks in my life and these really drown out the ambient audience noise. Kudos to whoever mixed the EP. These are how live albums should be assembled. I know after this I will be in line for a Bright Light Bright Light show sometime soon.

2014 has been nothing short of an explosive year for Bright Light Bright Light, with a release like this it makes me very excited for what he has in store for us next and for the remainder of 2015.

Written By
Serena Butler
More from Serena Butler
Relationships are balls of emotion that bring one up and down. Sometimes,...
Read More