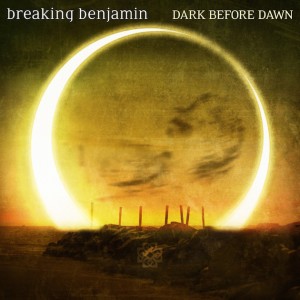 Breaking Benjamin officially returned from their four-year hiatus with the release of new track, “Failure.” It’s the first single off their upcoming LP, Dark Before Dawn, due out on June 23. “Failure” is the band’s first new single since 2010, when they released “Lights Out” off their fourth studio album, Dear Agony.

Breaking Benjamin’s fans response to the new song was exuberant: Within one hour of the track’s release, Dark Before Dawn skyrocketed to No. 1 on both the rock single and rock album charts at iTunes, and was in the Top 3 on the overall album chart as well.  And nervous fans of the band can now breathe a sigh of relief as the band’s sound on this new track is completely consistent with their last studio album. The track features the band’s familiar use of metal-driven riffs coupled with soft hooks and it also transverses between heavy and melodic several times, another signature sound.

How the hiatus affected the band was a serious concern as the band returns with an updated line-up that includes only one previous band member, lead vocalist and songwriter Benjamin Burnley. That the band has been revamped comes as no surprise as Burnley and two of his former band mates were involved in a legal dispute over future rights to the band’s name during the hiatus. But after emerging victorious on this issue in 2013, Burnley proceeded with his announced plan to continue performing under the band’s moniker. And now joining him in the newly re-formed Breaking Benjamin are drummer Shaun Foist (formerly of Picture Me Broken), bassist Aaron Bruch (formerly of Forever Quevre), guitarist Jasen Rauch (formerly of Red), and guitarist Keith Wallen (formerly of Adelitas Way).

Breaking Benjamin hits the road in April for a U.S. tour that includes performances at many of this year’s biggest rock festivals, including Welcome To Rockville, Beale Street Music Festival, Carolina Rebellion, Rock On The Range, Rocklahoma, Rock USA, and Rockfest 2015. Follow the band on the social media links below for the most up to date tour information.

Breaking Benjamin on the web: