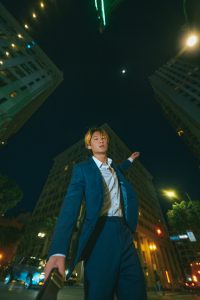 LA resident (St. Louis native) Boyu has shared his new single “NYC Ate Your Soul” – an alt-pop tale about a young woman migrating to the big city trying to rise to the ranks of aristocracy with her looks to appease old Wall Street men. The song is dripping with A+ songwriting & production, reminiscent of artists like Toro y Moi or Still Woozy.

Boyu had his own experience with trying to make it in the big city. “Before taking the recording artist route seriously, I was all in on the corporate banking path, thinking if I worked really hard and climbed the corporate ladder, I would be wealthy at an early age,” he says. “I graduated from Ohio State University on a full ride studying Finance & Economics and immediately started working in Boston at Banco Santander upon graduation (a Spanish multinational financial institution). It turned out to be an extremely dry & soul-sucking job that demanded 60-80+ hours a week, leaving me very little time to focus on hobbies, much less create music.”

Boyu started releasing music regularly in 2021, and hasn’t looked back since. He has quickly amassed a loyal following and gained the support of Spotify’s coveted ‘Fresh Finds’ playlist on multiple occasions. Boyu plans to release more new music this spring, but for now, stream “NYC Ate Your Soul” below.